Additive manufacturing is the process of manufacturing a material object through layer-by-layer technology enabled by computer-aided design technology. Or at least it used to be. A new kind of rapid prototyping is on the rise. Rapid prototyping is a useful process for scientists and engineers alike, who use 3D printing technology to rapidly manufacture objects for both theoretical and practical uses. Rapid prototyping allows for the creation of models and parts that could be used in engineering applications. In some applications, it used to take an idea and display it as a working model or prototype. A tool for engineers to envision what the end product of something might look like, or actually manufacture a tool necessary for their projects, or even produce the product they are going to be selling.

According to T.S. Srivatsan and T.S. Sudarshan's book: Additive Manufacturing: Innovations, Advances, and Applications, rapid prototyping has achieved for big successes in the development of products:
1. Reductions in both time and costs

3. Possibility of creating any shape that would otherwise be difficult to produce

However, the technology has progressed to the point where rapid prototyping could forever be changed. In 2015, Michael Breme, the head of Audi's tool design, described how 3D printing was benefitting their business. He said: "It enables us to produce the parts faster 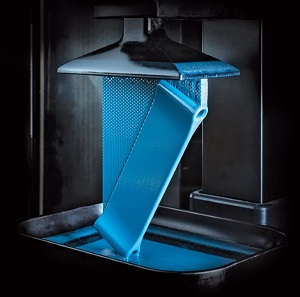 Credit: 3ders.org
and more cost-effectively. For example, with a 3D printer, we don't have any waste like we would with metal cutting, which means we're faster and more effective." However, back in 2015, there was only one problem with 3D printers. They weren't fast.

The 3D printing start-up company, Carbon, has received $81 million in funding from global investors this year. The investors include BMW Group, General Electric, Nikon and JSR Corp, amongst others. The company now has $222 million in funding that it will use to further their particular kind of 3D printing. The company utilizes Continuous Liquid Interface Production (CLIP). Their printer, the Carbon M1 printer produces a solid object from a small tub of liquid plastic through new stereolithography (SLA) rapid prototyping technology. They're making rapid prototyping even more rapid.

How do they do it?

Well, what this printer does differently to other printers is all in the ultraviolet (UV) light projector. The projector purportedly 'projects' what the end product should look like and then pulls it out of the liquid polymer (resin). Instead of a laser physically redefining the CAD (computer-aided design) pattern over and over again, the CLIP technology uses UV light and oxygen to produce a mechanically sound object without the need for layer-by-layer technology. As a result, a chemical process known as photopolymerization occurs.

The CEO of Carbon, Joseph DeSimone, said: "This product lays the groundwork for addressing major gaps in additive manufacturing as we work with our customers to continually innovate and push the boundaries of product design and production."

Carbon says their method of rapid prototyping is one hundred times faster than conventional printers available on the market today.

Speaking of the 3D printing market. The rapid prototyping materials (the actual resins used to print) market is expected to grow at a compound annual growth rate of 26.8% from 2016 to 2021. Markets and Markets estimate that the rapid prototyping materials market will reach USD 903.8 million by 2021. According to another report by Wohlers Associates, the entire 3D printing market will peak at $10 billion by 2017. They also confirmed that last year, 278,000 desktop 3D printers were purchased, showing that 3D printing is also becoming popular among hobbyists.