30 billion Internet-of-Things-connected devices are supposed to up and running by 2020. Some of these connected devices will be in the industrial automation industry, that will ensure manufacturing of goods never dies. But how many were running in 2015? A study conducted by an IoT analyst firm named Berg Insight has given a clear picture of just how many devices were connected. The report indicated that 14.3 million wireless IoT devices were connected in the industrial automation industry in 2015. 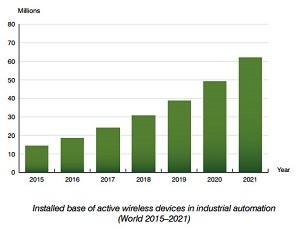 The report states that automation networks will grow at a CAGR of 27.7 percent, reaching 62 million Industrial Internet of Things devices by 2021.

The leading technologies that enable the wireless operations of automated factories are currently WiFi and Bluetooth technologies. Recently, an industry-wide architecture for narrowband internet-of-things two-way communication was secured by the 3rd Generation Partnership Project. Making the future of wirelessly connected devices that much quicker and efficient.

Johan Svanberg, a Berg Insight analyst, said: "Wireless communication and industrial IoT solutions can provide integration of different automation systems as well as enterprise systems which enables supply chains to be lean, even with a complex mix of products and output levels. Connected automation solutions also open up the possibility for entirely new business and service models which can give companies a much needed competitive edge in today’s manufacturing landscape."

Digital Trends reports that the three companies wanting to capitalize on Internet of Things infrastructure are Cisco, General Electric, and Verizon.

Business Insider confirmed that the industrial automation will be utilizing the most Internet of Things technologies, followed by government and the consumers coming in at third place. The market has been estimated to reach $6 trillion in the next five years.