The University of Michigan knows how important nanotechnology is. Engineers all over the world are actively busy with nanotechnology, that can be worn outside of the body, but also exist inside a body. Biomedical applications of nanotechnology have a long list of advantages if perfected. Now, researchers from the university have begun to work an injectable computer that uses radio frequencies to communicate with machinery outside of the body. Fancy having a WiFi connected body?

The engineers say that an injectable computer could help measuring tumor pressure inside the body, as well as other medical applications. At the helm of the project is David Wentzloff, an associate professor of electrical and computer engineering at the University of Michigan. The battery-operated computer was crafted for a project the university was running that encouraged students to build something that could "boost the evolution" of the Internet of Things. 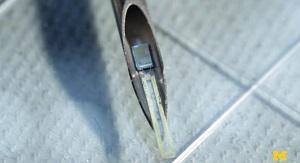 David Blaauw, a professor of electrical engineering and computer science at the University of Michigan, and another researcher attached to the designing of the injectable computer said: "We have incorporated in our system, a radio. Typically in the past, we've only been able to go a couple centimeters of distance. That's really small. Now, what we've done here is made a new type of antenna that can go much longer distances but is still small enough that it can be put inside a syringe."

The issue that researchers have had in the past is that the human body absorbs most of the electromagnetic radiation previously making it difficult to connect devices together through radio frequencies. The engineers went to work and produced a radio that can speak to another device by up to a foot outside of the body.

Source: The University of Michigan