Engineers at the University of South Wales have just set a new world efficiency record for solar cells. It's allegedly all about the solar cell configuration that allows sunlight-to-electricity conversion efficiency to be pushed up to 34.5%. Dr. Mark Keevers and Professor Martin Green work inside the UNSW Australian Centre for Advanced Photovoltaics and have configured the solar cells in such a way that when sunlight hits it, it splits sunrays into four bands that manage to extract more electricity from them.

The United States National Renewable Energy Laboratory confirmed that the system is 44% more efficient than the last record. 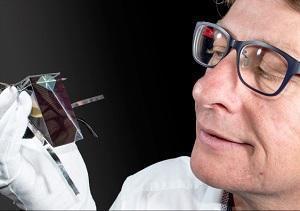 "This encouraging result shows that there are still advances to come in photovoltaics research to make solar cells even more efficient. Extracting more energy from every beam of sunlight is critical to reducing the cost of electricity generated by solar cells as it lowers the investment needed, and delivering payback faster," said Keevers.

UNSW says that the system devised by Keevers and Green using no concentrators and uses pure sunlight, whereas the last record was set by concentrator photovoltaics that utilizes mirrors that concentrate the light.

"What's remarkable is that this level of efficiency has not been expected for many years. A recent study by Germany's Agora Energiewende think-tank set an aggressive target of 35% efficiency by 2050 for a module that uses unconcentrated sunglight, such as the standard ones on family homes," said Green.

The good news is that solar cell efficiency is moving faster than expected, however, Green cautions that photovoltaic research must continue in Australia so that the country can also benefit from the engineering marvels they create. Australia has been progressing past many countries in being the first to subsidize photovoltaic cells for home use in some of its suburbs. The Clean Energy Council has also been very advanced in its setting of guidelines for installers in Australia. Now, with added efficiency, renewable energy is progressing quicker than previously thought. Additionally, the Australian Renewable Energy Agency has been funding solar concentration methods of photovoltaic cells. Recent reports on funding have indicated $1.4 million has already been funded.