The Ivanpah Solar Power Facility is the world's largest solar plant. It is stationed in the Mojave Desert in California, United States and generates 377 MW of clean solar power that powers up to 140,000 homes in the area. It has 173,500 heliostats that have two mirrors each. It is relatively new, it was opened in 2014, and for the first time has unfortunately caught on fire. The fire was purportedly caused by "misaligned mirrors" which the plant uses to reflect the sun into a boiler tower instead of utilizing photovoltaic solar cells. 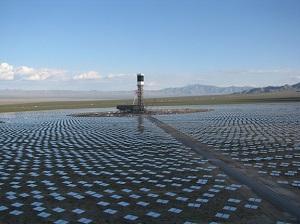 The Associated Press reported that poorly-aimed heliostats "focused the sun's energy about two-thirds of the way up the tower instead of at the boiler at the top of the tower." Electrical cables caught on fire as a result and damaged water pipes within the tower. The tower is since non-operational and there is no clear picture of when the tower will be back online. Another tower is down for maintenance, leaving only one tower operational at the facility.

Talking to WIRED, Adam Schultz, a program manager at the UC David energy Institute, said: "Ivanpah has been such a mess. If the fire knocks them offline, it's going to further dig them in." He is, of course, referring to the pressure on Ivanpah to meet its targets for energy production, which it hasn't been doing.

The California Public Utility Commission has been warning the facility that they have not hit the targets that were set out for them. However, there is a petition making the rounds that will fight for the plant to continue to produce solar energy to the utility. The tower down for maintenance and the tower that caught fire was an unexpected hurdle in their plans, but they will continue to petition to retain their contact with the Public Utility Commission.

Further complaints about the plant have ranged from the amount of birds that are being killed as a result of the mirrors and there have been complaints from pilots that say they are blinded by the reflections of the mirrors.

The Ivanpah Solar Power Facility is run through a collaborative effort between NRG, BrightSource, and Google (Alphabet). CleanTechnica spoke to David Knox, an NRG spokesman. He spoke of the engineering difficulties the plant has been experiencing. He said:

"We encountered the kinds of engineering problems that can really only be seen and solved in a first full-scale deployment. And in that first year, an inordinate number of partly cloudy days impacted not only the energy output, but also the plant's ability to commission and actually fine tune all of its control systems. But now we that we have leatrned the lessons that we have learned, and the industry has learned the lessons that we have learned; others don't have to. But the first large-scale installation needed to go through those steps."

Thankfully, the fire was put out in 20 minutes by the crew present on the day of the fire and nothing was burned down. More news as this story develops.