A solar wind and hydrogen-powered boat faces years at sea

Victorien Erussard, an offshore racer and Merchant Navy officer has taken to the seas aboard the latest marvel of engineering. He has set aside six years of his life to travel around the world in a boat that will not generate any carbon. 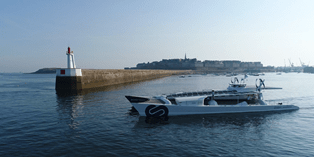 50 engineers, designers and naval architects worked on the interdisciplinary, multifaceted ‘Energy Observer’ boat. The racing boat is powered by an assortment of renewable sources such as: a hydrogen fuel cell system, solar panels, and wind turbines.

The boat will visit 50 countries. 101 stopovers will be observed during the trip. It will be the first ‘hydrogen ship around the world’ the engineers behind the boat professed. At every stop, the team will investigate renewable energy projects and meet with leaders. So far they have met with Prince Albert of Monaco and the President of France Emmanuel Macron.

Documentary-maker Jerome Delafosse, is following the Energy Observer in its six year journey and keeping audiences entertained by releasing constant YouTube updates of its progress. In the intro video to their expedition, he said:

“The only way to combat global warming is to reduce greenhouse gas emissions. Today, we know that renewable energies and hydrogen is THE path forward. Energy Observer has taken up the challenge of becoming the symbol of energy transition to prove that a cleaner world is possible.”

The boat is 100 feet long and quite aesthetically pleasing. It is also a symbol of engineering change - a signal to other marine engineers that the times are a-changin’. The boat represents a hope that one day marine vessels may be powered only by renewable sources. The boat cost $5.25 million - and it’s easy to see why; there are 1,400 square feet of solar panels fitted on the surface of the boat.

Launched from Paris in May 2017, the boat is nearing its first full year at sea. The technology on board propelling the boat forward was developed by French research center CEA-LITEN. When the sun is shining and the wind is blowing it uses the solar panels and wind turbines. When the moon is in the night sky, it utilizes its hydrogen tanks to propel it.

The hydrogen fuel it uses is “three times” more efficient than regular fuel. The fuel is created through sea water electrolysis. Delafosse believes the technology powering the boat can be used in many more applications. He said:

“We can use this technology in hotels, houses, in cars...the idea is to be less dependent on the network. It shows how fast things can happen: as it did in London at the turn of the last century when moving from horses to cars, it will happen with renewable energy.”