In 2015, Michael Breme, the head of Audi tool design described how 3D printing was benefitting their business. He said: "A brand new fascinating technology has made its way to tool making. 3D printing. It enables us to produce the parts faster and more cost-effectively. For example, with a 3D printer, we don't have any waste like we would with metal cutting, which means we're faster and more cost effective." So, 3D printing making its way into engineering is both useful for the speed of production and ensures that costs are minimal as well. 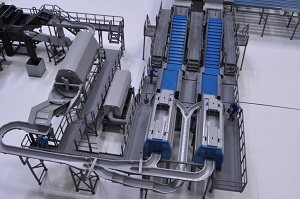 Another novel, innovative way of using current 3D printing technologies that might excite the civil engineering readers, is 3D printing blueprints. Architects are now printing realistic models of blueprint plans and working with design engineers to measure the feasibility of a construction project. This is something that could be eliminated with augmented reality head-mounted technology and AutoCad software, however, it shows impressive dedication from engineers who want to 3D print models of what they could one day be building.

An agricultural engineering company (Wyma Engineering) showed off a 3D printed blueprint of its fruit sorting industrial machine that can be seen to the left of this article. The 3D printer plastic that was used to perform the 3D model blueprint was called Accura Mix. You know, in case you want to get into the business of 3D printing all of your blueprints into models, to make it easier for the engineers to envision what the end product might look like. This way of printing 3D models enables engineers to show project investors the intricate details of a build and give them a clearer picture of what the construction might look like. This would eliminate some of the time spent 3D model building, and probably save some design engineers some sleep.