Amazon auditions robotic picker arms for the future of warehouses

Amazon has announced the winner of a competition held to find the next big warehouse/factory robot arm picker. Teaming up with Germany's RoboCup, Amazon urged engineers to create robot item-pickers in a competition that "aimed to strengthen the ties between industrial and academic robotic communities. The winners would receive $25,000 for first place, $10,000 for second and $5,000 for third. Amazon is currently investigating how to further automate their packaging plants and automate their delivery systems as well. 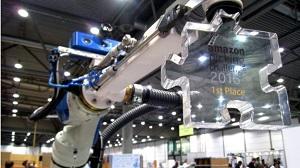 Tye Brady, the chief technologist at Amazon Robotics told the BBC: "Our vision is humans and robots working shoulder to shoulder. It was inspiring to see 16 top teams with so many different approaches to the same problem, and we also saw the advancements robotic technology has made since last year."

The teams had to demonstrate sophisticated tasks that included a host of products strewn inside a box that the robot arm picker had to pick up. Team Delft's robot was able to successfully complete a pick in 30 seconds, cementing them as the winner of the competition. The items included some of Amazon's very own products, including clothing, DVD boxes, and bottles of water. It is clear Amazon wants to see which system they might be able to employ in their own factories. Amazon recently purchased Kiva Robotics for $775 million and has started to employ automated processes in their factories. Bloomberg confirms that Amazon utilizes 30,000 of the Kiva robots in its warehouses. Employing picker and packer robots would further automate warehouses that are already seeing a lot of automation. The Kiva robots will allegedly save Amazon $2.8 billion alone.

Team Delft's robot appears to use a suction gripper to lift the items and keep them attached to the robotic arm. It then releases the object into the box it has been programmed to store the objects in. The robots use artificial intelligence to learn how to pick and place more efficiently as it works. According to The Verge, Team Delft's robot has a failure rate of 16.7 percent.

The competition emphasises how advancements of robotics have led to the replacement of humans. The repetitive nature of picking and stowing will now be done by robotics instead of being done by humans.