Are flying cars the future of sustainable transport?

Flying cars could be the key to lowering carbon emissions through sustainable transport in the future, according to a new study.

The University of Michigan has found while flying cars — which are technically called electric vertical takeoff and landing aircraft, or VTOLs — are not justifiable for short trips, they have a niche role in sustainable transport for trips further than 100km.

The researchers also found that flying cars could be crucial to reducing congestion in big cities. According to the authors of a joint study from the University of Michigan’s Centre for Sustainable Systems and the Ford Motor Company, this would involve a flying ride-share taxi service. 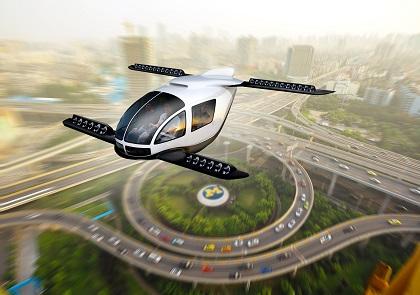 Source: Dave Brenner/University of Michigan School for Environment and Sustainability

Senior author of the study Gregory Keoleian said, “To me, it was very surprising to see that VTOLs were competitive with regard to energy use and greenhouse gas emissions in certain scenarios. VTOLs with full occupancy could outperform ground-based cars for trips from San Francisco to San Jose or from Detroit to Cleveland, for example.”

Not only are flying cars more sustainable for long journeys, unsurprisingly they’re also a faster way to travel. The study noted that the point-to-point flight path and higher speeds resulted in a time saving of 80 per cent, compared with ground based travel.

Engineers are currently facing the challenge of meeting a growing demand for convenient transport, while reducing carbon emissions and congestion.

While electric cars and automated driving may achieve some of the goals in terms of reducing carbon emissions, they would contribute to the congestion problem. Researchers believe VTOLs could provide a solution, in the form of a piloted ride-share taxi service.

First author of the study Akshat Kasilwal said, “Not only is high passenger occupancy better for emissions, it also favors the economics of flying cars. Further, consumers could be incentivized to share trips, given the significant time savings from flying versus driving.”

The scientists analyzed the five phases of VOTL flight: take-off, climb, cruise, descent and landing. They found that while lots of energy was expended during take-off and landing, it produced no greenhouse gas as it cruised at 240kph. However, the batteries would require electricity to be generated by a power plant.

For trips shorter than 35km, single-occupant conventional ICEVs were more sustainable to run. This is significant as the average commute in the US is 17km.

Co-author of the study Jim Gawron said, “As a result, the trips where VTOLs are more sustainable than gasoline cars only make up a small fraction of total annual vehicle-miles traveled on the ground. Consequently, VTOLs will be limited in their contribution and role in a sustainable mobility system.”

Several aerospace companies — such as Airbus, Boeing, Joby Aviation and Lilium — and agencies such as NASA are developing VTOL prototypes. The critical efficiency enabler for these aircraft is distributed electric propulsion, or DEP, which involves the use of several small, electrically driven propulsors.

Uber’s Elevate team is also building a prototype for aerial ridesharing called uberAIR. They are utilizing electric VTOL technology in the hopes of developing infrastructure for a VTOL network, according to a whitepaper from the program’s launch in October 2016.

Uber said this network would be significantly more cost efficient than building heavy infrastructure such as rail, roads, bridges and tunnels. Additionally, it would revolutionize commutes; instead of following fixed routes, VTOLs would travel independently of a specific path. This would significantly reduce congestion, and single-event interruptions causing delays. 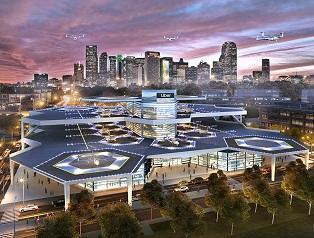 Currently, helicopters are the closest form of transport to VTOLs, but they are too noisy, too expensive and emit too much carbon. VTOLs, on the other hand, are ahead in each category. They are also likely to be safer; they won’t depend on a single part to stay airborne and will use autonomy technology to reduce operator error.

In the whitepaper, Uber suggests VTOLs will prove to be an affordable form of daily transport for the masses, and may be even cheaper than owning a car.

So how will it work? They plan to launch uberAIR in three different cities. Two have been selected: Dallas-Fort Worth, Texas and Los Angeles, California. The third will be announced later this year; a city in one of the following countries: Australia, Brazil, France, India or Japan.

The VTOLs will rely on Skyports, located on the tops of buildings. According to Uber, the top names in architecture, design and engineering are working on an all-new design to accommodate up to 1000 takeoffs and landings per hour.

Uber said they hope to start testing these networks in 2020, via the operation of demonstrator flights. Commercial operations are expected to begin in 2023.