You would often be confronted with the situation where you have to disagree with your boss or even worse – a client. Is it worth going through the pain of disagreement and the agony afterwards? My  belief is that if you want to stay true to yourself as a credible engineering professional - you have to raise your objections.

It is perfectly natural to avoid conflict – it can be the source of pain and perhaps (in an extreme case – being fired for being obstructive). After all – you won’t get paid more for actively disagreeing with your senior manager or boss and you could poison your relationship forever. 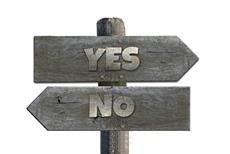 However, if you handle this correctly – you can clearly mark yourself as someone who is going places and is adding real value to the organisation. By changing a bad decision of a superior manager, you can also avoid being placed into an invidious position in the company by executing something which could be a nightmare and ultimately damage the company and your job.

A few suggestions when considering the best strategy if you disagree with your boss are outlined below.

Is your boss someone who listens to other opinions or who is absolutely paranoid about any dissent? What would happen to the organisation and your job; if you don’t confront the issue and change the decision of your boss?

Often, it is a good idea to sit back, cool off and think carefully or consult with others before telling your boss that you disagree with her. It is also often a great idea to talk in private to your boss rather than ‘show them up’ in public.

Follow these Tactics if you are going to disagree

Initially, ask for permission to disagree. When your boss says ‘yes’; you are getting their tacit assent to listen to something contrary to their viewpoint. You are showing them respect.

Try and align your disagreement with a higher purpose of the organisation or something your boss feels deeply about. It could be the environment, regulatory changes or cash flow challenges.

Deal with the objections calmly and dispassionately. Almost with some disinterest. Focus on the problem and above all – do not attack your boss personally in any shape or form. Take deep breaths and speak slowly if you are stressed.

Clearly state the original statement from your boss in her terms and from her perspective so that everyone understands the context your objection is framed in. Avoid making subjective statements using emotional language.

Stay modest, humble and detached from your opinion. Appeal to the higher order purpose that everyone subscribes to in the organisation.

Finish by restating your boss’s authority and ability to accept or reject your disagreeing opinion.

Inject some mild humour into the discussion and emphasise that this is really your opinion.

As Sam Hunt remarks: I like disagreement because it forces both sides to question their own opinions and why they feel that way.

Thank you Amy Gallo of Harvard Business Review for a stimulating article on this topic.