The world’s first driverless ferry is set to replace footbridges in the Norwegian city of Trondheim. Soon pedestrians will be able to cross the canal that separates the Ravnkloa fish market and the Vestre Kanalhavn dock much quicker than they’ve ever been able to before.

With the population growing steadily, engineers have been faced with the challenge of creating more river and canal crossings — however bridges can be costly to build and obstruct the flow of boat traffic. A team at the Norwegian University of Science and Technology (NTNU) has designed a self-propelled Autoferry to solve this problem.

There’s currently a small number of unmanned cable ferries located at various locations in Norway. However, this project aims to remove the cable, which will reduce operating costs and revitalize coastal areas. 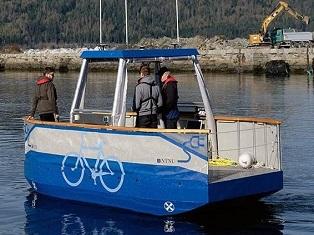 So how does this ferry work? An on board Global Navigation Satellite System (GNSS) will help the vessel to self-navigate from one bank to another. Four integrated light sensors — a radar unit, an infrared camera, an optical camera and a Light Detection and Ranging (LiDAR) unit —will allow the ferry to detect and avoid kayakers and other boats. If it’s on the opposite side of the canal to waiting passengers, they can call it over with the press of a button.

While researchers at NTNU have been working with autonomous vessel management systems for years, they’ve never trained a computer to predict movements or read complex traffic scenarios in such great detail before.

The Autoferry takes approximately one minute to cross the canal, which is just less than 100 metres wide. It currently takes pedestrians 10-15 minutes to cross using the footbridge. The watercraft will be able to hold 12 passengers, plus bicycles and baby strollers.

Speaking to Gemini Research News, the head of NTNU’s department of engineering cybernetics Morten Breivik said the project has had its share of obstacles.

“One of the challenges of the project is that all these systems need to work well together. We also want to have sensors on land that can monitor blind zones,” he said.

The Autoferry isn’t quite ready to carry members of the public across the canal. Engineers are currently conducting a series of tests to ensure its safety. In phase one, the boat traffic in the canal was monitored and recorded. Phase two saw the construction of a half-scale ferry (five metres long).  The propulsion systems, batteries and charging systems were all tested. Researchers are now developing the navigation system, automatic docking and testing the ferry’s anti-collision sensors.

Phase three will commence soon: it will involve putting the full-scale ferry into action and final testing of the technology. 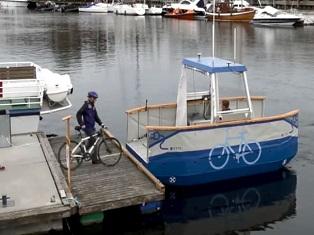 NTNU’s head of department of electronic systems associate professor Egil Eide is in charge of operations for the Autoferry. He told Gemini Research News that he believes the driverless ferry will improve the quality of life for citizens.

“Driverless ferries can help develop regions that previously haven’t been linked to cities and towns due to a lack of infrastructure, for example,” he said.

“We believe that an industry will evolve from this project. The driverless ferries can become a new tool in community planners’ toolboxes.”

Researchers hope these ferries can one day connect to a city’s existing forms of transport and be used as an alternative form of emissions-free passage. They are also optimistic that these ferries could revitalize small island communities by providing a cheap form of transport. Researchers are now investigating a way to make the technology scalable, so ferries can be used over longer distances in rural areas.