Earlier in the year the Consumer Electronics Show, 2016 took place in Las Vegas, allowing electronics manufacturers to show off the new innovations they had been building up in their factories. An autonomous passenger drone by the name of EHang was teased as the first autonomous aerial vehicle in history. Since then, more and more engineers have been lending their minds to companies to create autonomous passenger vehicles that could potentially take to the sky.

The company behind EHang is upping the ante with its confident claim that they will be able to manufacture 1,000 drones for a company named Lung Biotechnology PBC. The company in question wants to design lungs and other artificial organs which can then be flown to hospitals in need. The drone will be renamed to the Manufactured Organ Transport Helicopter (MOTH) and will be the efficient vehicle that transports the organs. 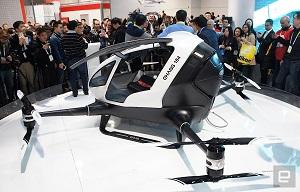 The EHang 184 carries a single person at a speed of 10 MPH to 65 MPH through the air. The company is also able to fly their drones at night, which would be beneficial for hospitals that are in need at odd times of the night or the morning. According to the team of engineers, the drone can be preprogrammed on a course within a 10-mile radius.

The company says: "Currently, organ transplants are limited by the number of brain-dead donors, which results in thousands of death on an organ transplant waiting lists each year."

The plans to launch this initiative might take a while seeing as though artificially designed organs are not yet a reality. Lung Biotechnology rakes in $700 million in yearly sales, according to Engadget. However, the companies are excited by the prospect of being able to transport the artificial organs of the future. The company is conducting research in the pig-to-human xenotransplantation and stem cell technology biomedical engineering industry. Once it is declared safe to use, if at all, the drones and the artificial organs will be flown around the clock and save lives. Or at least that's the intention.