The breakthroughs in the biomedical engineering industry are staggering. For instance, the world has moved closer to a system of wearable diagnostic tools that are designed to continually monitor human health – consider the Fitbit for instance.  And ideas that had previously been designated to the realm of science fiction are becoming reality.

One such advanced study involves ingestible robots, used for retrieving swallowed button batteries and also for the treatment of the wounds they cause. In the US alone 3,500 batteries are reportedly swallowed annually. These robots are controlled by magnets on the outside of the body, but some robots may eventually be powered by stomach acid.

With biomedical engineering technologies becoming more apt at generating data about the human body and with more accuracy, the world is edging closer to more precise medical diagnoses.

Robert F. Graboyes, a senior researcher at the Mercatus Center at George Mason University, has said that wearable telemetry will redefine the future of doctors’ appointments. In his article, ‘Wearable Telemetry - Eating Health Care’, he writes:

“Wearable telemetry (Jawbone and Fitbit are familiar examples) is helping to overturn 2,500 years of medical tradition. For the first time, wearables offer convenient, passive, continuous monitoring of vast numbers of human bodies. Implications for the doctor-patient relationship are profound.”

Patients will be equipped with data that doctors might have to peruse and consider, before diagnosing a patient.

However, the affordability of wearables in a time when there is still a stark gap between rich and poor highlights the need for affordable novel applications for medical diagnosis in the biomedical engineering industry. 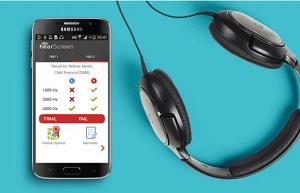 Audiologists in South Africa are making it as wallet-savvy as possible, by installing an app on your smartphone.

“Hearing loss is considered an invisible epidemic because people don’t see it or know that someone suffers from it,” said De Wet Swanepoel, a professor of audiology at the University of Pretoria, South Africa, in an interview with the BBC.

The project that Prof Swanepoel worked on has led to the development of an app called HearScreen. All you need is your smartphone and a pair of headphones. The app uses a series of beeps that tests the hearing of the person through the headphones. Based on what they can and cannot hear, the app determines the extent of medical assistance required.

The app is not only ensuring that poorer rural communities get the diagnoses they need, but it also addresses the shortage of audiologists in South Africa.

“Mobile apps can serve a very useful role in raising awareness about hearing and making hearing care more accessible. But if a mobile app for hearing assessment is not accurate this can give incorrect information to the user, which can be harmful,” Dr Shelly Chadha, technical officer for deafness and hearing at the World Health Organization, speaking to BBC News.

A report compiled by Research2Guidance revealed that there are 259,000 health apps available on the app stores available to smartphone users.

In a surgery first, a robot stitched up a pig’s small intestine. Relying on its own tools and artificial vision and intelligence it carried out the procedure without assistance. Furthermore, the procedure performed by this Smart Tissue Autonomous Robot (STAR) was deemed to have been completed more ably than by human surgeons who were given the same task.

One would predict that real, mortal surgeons might consider this robot dexterity and prowess threatening. On the contrary; one of the researchers on the STAR project, a paediatric surgeon, was not in the least concerned, saying, “Even though we surgeons take pride in our craft at doing procedures, to have a machine that works with us to improve outcomes and safety would be a tremendous benefit.”

And the sky is the limit: robots that allow doctors to login from around the world through internet connections, and perform surgeries from hundreds of miles away, are no longer merely futuristic notions. It is indeed an exciting time for would-be students interested in both engineering and medicine. Biomedical engineering offers a number of options, from software design to the design, building and maintenance of machinery and gadgets for medical facilities.

Dean of Engineering at the Engineering Institute of Technology (EIT), Dr Steve Mackay, presented at the annual Biomedical Engineering Conference in Canberra, in Australia last week. As an educator he spoke of the challenges faced by EIT’s course designers endeavouring to expose students to just the right mix of content in this dynamic and broad field of engineering. He also spoke of his delight in the technologies available today which enable the instructors to reach students all around the world on a live, interactive platform.