Can engineers introduce roundabouts to the United States?

Geospatial engineering is a recent addition to the list of engineering roles you could find yourself in if you have an affinity for circumnavigating the world of civil engineering. These engineers are currently trying to imagine the introduction of European-styled roundabouts for the United States of America. the engineers would work closely with civil engineers, town planners and the like, to plan out how to design roads so that traffic and accidents are significantly lower.

According to The Economist, America only has 4,800 roundabouts in the entire country and says that a quarter of road deaths occur in intersections. 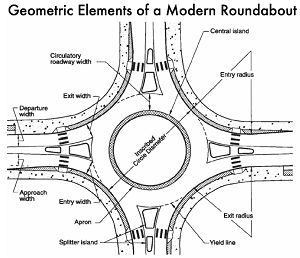 Explaining why there is a lack of roundabouts in the States, Lee Rodegerdts, an international roundabout expert at the Portland transportation engineering and planning group, told CityLab: "My guess is that the possible benefits of roundabouts weren't widely known, and we had a long history of using traffic signals. It took some bold people -- both on the elected-official side and on the transportation professional side -- to get the first ones installed, and they deserve a lot of credit for sticking their necks out there.

Steve Mackay, the Dean of Engineering at the Engineering Insitute of Technology believes American engineers did not align themselves with the KISS (Keep It Simple Stupid) principle. He implies that they did not see the facts and figures to see how beneficial roundabouts would have been for the United States, instead of their complicated, more unsafe, four-way intersections. Engineers at Kansas State University discovered that delays were 65% less at roundabouts.

Mackay also speaks of the angle of collision in a roundabout in comparison to the American alternative. He says, "If you do have an accident in a roundabout, it's at an angle so the actual impact would be lower than in a four-way intersection. From a financial point of view, which is an area which we often neglect as engineers - dare I say - your return on investment for a roundabout is about eight times greater than that of a four-way intersection."

Amsterdam has even added a special ring for cyclists who are given the right of way to make the roundabouts safer for them. This is something missing from some recent adopters of the roundabout who are now trying to build cities with bicycle lanes and roundabouts that maintain a flow of traffic with the right of way rules for cyclists due to bicycle and car-related incidents in the past.