Home NewsCheck out this awesome LEGO exhibition in Perth this July

Check out this awesome LEGO exhibition in Perth this July

Did you now an interactive LEGO brick exhibition has arrived in Perth? 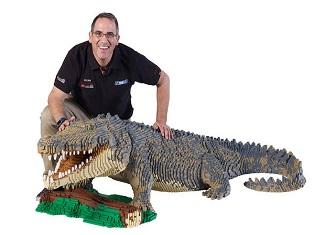 That’s right, Brickman Awesome will be showcasing the tallest LEGO model in the Southern Hemisphere — a NASA SLS rocket, which was constructed using more than 450,000 bricks and measures in at 7.5 metres tall. It took exhibition curator Ryan McNaught more than 500 hours to build the model and it even features a lighting display which creates the illusion that the rocket is blasting off into space.

The exhibition also features a life-sized Toyota Camry, the only life-sized LEGO Harley Davidson motorbike ever built and the world’s largest LEGO Caterpillar 797 dump truck. For the science-fiction fans, there is a life-sized TARDIS from Doctor Who and a light-up Back to the Future DeLorean. A full-sized Australian saltwater crocodile, weighing 60 kilograms and comprising of 40,000 LEGO bricks is also on display. Don’t forget to check out the LEGO Kangaroo, Koala and Orca too!

In total, there will be 38 brand new LEGO models, which have been created using more than 2 million bricks and took the team more than 5000 hours to construct. Ryan McNaughton is the only LEGO Certified Professional in the Southern Hemisphere and one of only 14 in the entire world!

Visitors also have a chance to show off their building skills. There’s the opportunity to help the Brickman team expand their colony of Emperor Penguins. You can also build your own time machine and contribute to Australia’s longest LEGO model, by adding new sections to the snake!

This event is being held at the Perth Convention Centre until July 22.