China has just about completed the world's largest radio telescope named the Five-hundred-meter Aperture Spherical Telescope (FAST). The telescope has been built by the National Astronomical Observatories of the Chinese Academy of Sciences (NOAC) with the assistance of Australian CSIRO engineering. Don't question the rationale behind building it, because you will end up listening to a conspiracy theory of how this dish might actually lead to a conversation with an alien race. However, it is a serious effort into finding radio signals within galaxies and investigating dark matter. Essentially, China is looking for radio signals buried far out into the stretches of the universe a radio signal has never reached before. The telescope cost $184 million and is positioned in China's Guizhou Province. There is one snag that is delaying the launch of the telescope. China confirmed to the Xinhau News Agency that it first needs to relocate up to 9,000 people before the telescope can be operational in the area. As a result, an electromagnetic wave environment will descend on the land without any chances of people getting in the way. 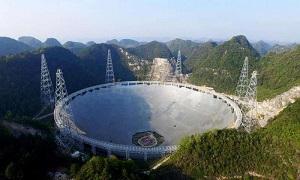 Dr. Larry Marshall, Chief Executive of CSIRO told PHYS: "Global collaboration is an integral part of CSIRO's Strategy 2020, as it maps out our desire to deliver science, technology, and innovation to new customers and markets while also delivering benefit back to Australia. This is a really exciting project and builds on 40 years of CSIRO collaboration with Chinese industry and research organizations."

The telescope - which stands at 30 soccer fields in length - will be able to outperform current telescopes by seeing several simultaneous beams as it measures for distant and hidden galaxies. Acting director of CSIRO's Astronomy and Space Science wing, Dr. Douglas Beck, said: "The powerful receiver we've created for FAST is the result of our long history developing cutting-edge astronomy technology to receive and amplify radio waves from space. Extending our technology and collaboration to China and working on what will become the world's largest radio telescope really cements our position as a global R&D leader in this space."

They expect to have FAST fully operational by September, 2016. To see the progress that had been made as of January, check the video below: