Home NewsCivil construction industry will get robot makeover by 2020

Civil construction industry will get robot makeover by 2020

Skycatch is a drone data software company in the United States who's tagline is: Connecting people and machines to the real-time physical world. It is a tagline that indicates what the future of construction could look like. Machines doing what the people would be doing in real-time. The company recently received funding to the tune of $22 million that would see them producing hardware and software for unmanned aerial vehicles that would assist with civil engineering endeavours. 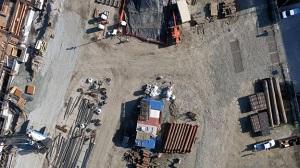 According to BBC News, a Japanese construction company named Komatsu is taking Skycatch's hardware and software further by implementing the technology into automated bulldozers. Reportedly, the drones would deliver a 3D model of a building to a computer and then the information is sent to the unmanned machinery so that it can successfully do its job on a construction site.

The drones look down on a construction site and can produce data about the site for the civil engineers that would be able to estimate how long a job is going to take based on the analytics.

Skycatch's chief executive, Christian Sanz, spoke to BBC, saying: "The more visible data that you have on a site, the more you'll see machines and robots moving things around rather than humans."

Mapping a site has never been easier than with the drones that scan the entire site and turn into a virtual design that is easily accessible to the civil engineers to peruse. "With the former, traditional method, it takes about two weeks, on average, to survey a certain piece of land. Meanwhile, with Skycatch it can be completely down within one day, or even 30 minutes," says Kenishi Nishihara, a project manager with the Smart Construction division.

Alternatively, Technavio also released a reported titled Global Mobile Robotics Market 2016-2020 and estimated that the robotics market would spike by 12% by 2020.

Komatsu is calling their drone-ground-scanning-bulldozer-navigating initiative is being called 'Smart Construction'. Martin Schulz, an economist at Fujitsu Research Institute in Tokyo, spoke to Bloomberg last year, saying: "The labor shortage in the construction industry could reach a crisis level in the next few years."