Thirty football fields in size. 500 metres wide. A marvel of civil engineering. It's the Five-hundred-meter Aperture Spherical Telescope, also known as FAST, and the construction is complete. The final touches are happening and it will be fully operational in September. The Xinhua News confirmed that the final 4,4450 panels were positioned in the center of the dish.

Chinese scientists had the idea for the telescope back in 1994, and now it has been completed. Engineer Zhu Boqin immediately began surveying land to decide where the telescope should be built. He eventually found a "round depression embraced" by hills in China's Guizhou Province and subsequently decided that that was the perfect place. The engineer said that the site's surroundings provided a perfect platform that facilitated the right amount of radio silence for the telescope. There are no towns in a 3-mile radius. The only problem was that the round depression had a village in the middle of it. The residents were relocated in 2009, and then the project really started gaining traction. The telescope is a global collaboration between the National Astronomical Observatories of the Chinese Academy of Sciences (NOAC) and Australia's Commonwealth Scientific and Industrial Research Organisation (CSIRO).

What is the telescope being used for?

More than 2,000 pulsars so far said to have been detected

Help in the search for extraterrestrial life 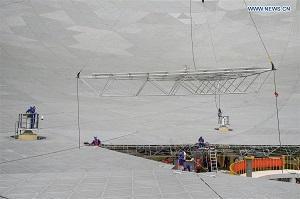 Talking to CCTV, Yue Youling, associate researcher of National Astronomical Observatories, said: "Understanding the fundamental physics of pulsars will help us understand the Big Bang. Now we only know what happened after the Big Bang, everything before that relies on our calculation. Therefore, there are a lot of uncertainties."

It cost a total of $185 million to construct.

NAN Redong is the general engineer and chief scientist on the FAST project. He said: "FAST will enable Chinese astronomers to jump-start many scientific goals, such as surveying the neutral hydrogen in the Milky Way. detecting faint pulsars, and listening to possible signals from other civilizations. It's time for China to have its own big telescope."

That's right. The Chinese want to contact civilizations hidden in the cosmos, or pick up their communications that they have been sending our way. You know, amongst other great uses the telescope offers. Nonetheless, scientists would be nowhere without engineers. They have built one good-looking telescope. and might just built the greatest chat room between civilizations.