The Nevada desert seems to be the latest hub of energy generation. Tesla has built their new Gigafactory dedicated to the production of lithium-ion batteries and Crescent Dunes, a solar power facility, supplies energy to approximately 75,000 homes. It is both beautiful to look at and revolutionary for energy generation in the world today.

The company behind the behemoth facility is SolarReserve, that employs engineers around the clock to maintain the facility. According to the company's website they employ around 4,300 people with the running of the facility. The biggest draw card that highlights this facility's usefulness is that it can even store energy during overcast weather and even operate at night, which makes the plant invaluable. 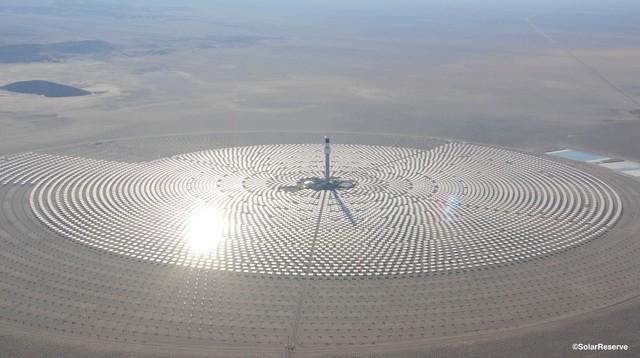 SolarReserve's CEO, Kevin Smith, told TIME magazine, "This is the first utility-scale facility in the world with this technology. Our technology can truly replace conventional generation."

Other solar facilities suffer under weather conditions, slowing down the storing and producing of energy due to the panels requiring sun.

The Crescent Dune plant uses its mirrors to reflect light into the central tower, which then heats up the liquid salt that stores the heat and turning it into a battery. TIME confirms that the plant produces "zero tons" of carbon.

Professor Jay Apt of the Carnegie Mellon Electricity Industry Center, said: "We're all hoping that, just like photovoltaic power, we'll start getting on the downward slope of the learning curve. If you crank a whole lot of those units, you'll learn to do it better."

The company is hoping that the facility can set an example for the rest of the world, and perhaps the world will follow suit and set up their own facilities that utilize molten salt power generation.