There's a new sheriff in town. It seems Dubai is wanting to be the leader in all forms of manufacturing and renewable energy lately. They have 3D printed full business offices and are now looking to build the world's largest solar power plant. This would eclipse the current record holder, Ivanpah Facility in California, that has recently seen a lot of technical difficulties and a tower-destroying fire. 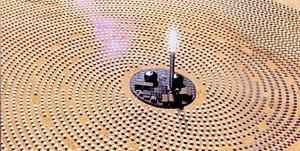 The announcement came from the Dubai Water and Electricity Authority (DEWA) who promised to generate 1,000 megawatts of clean energy by 2020. Ivanpah currently does 392 MW. So, Dubai is aiming high. This will follow the same setup as Ivanpah does, which does not rely on photovoltaic cells but rather uses reflective mirrors (heliostats) to redirect sun energy to the main power tower that converts the concentrated light into heat with the assistance of a steam turbine.

The tower will produce power that only costs 8 cents per kilowatt hour, whereas the current rate for renewable energy is 15 cents per kilowatt hour. The average house uses 30KWh per day, so the plant is producing energy at a very low cost. According to DEWA the solar plant will be able to remove 6.5 million tons of carbon emissions from the country per year. Gizmodo reports that a coal plant produces 3.5 million tons of C02 per year.

"An advantage of CSP (concentrated solar power) is that thermal heat, which used to produce electricity, can be stored easily. This makes it possible to produce electricity after sunset," said Saeed Mohammed Al Tayer, DEWA's managing director, and chief executive officer. "The plant will have several thousand heliostats located around a tower which will receive the radiation reflected by the heliostats. The heat-transfer fluid is then used to power the steam turbine to generate electricity."

Let's just hope the plant doesn't go through the same troubles like the Ivanpah facility has gone through, such as lack of sun due to bad weather and heliostats reflecting into the wrong part of the tower causing fires. However, being in Dubai, we're certain that there is going to be more than enough sun to go around.

Solar technologies are becoming better and more efficient as time goes on. Here is a high-efficiency photovoltaic cell system that we could also soon be seeing in our daily lives: