Dubai is banking on 3D printing in a big way. The country has announced their 3D printing strategy. The strategy is being enforced by Sheikh Mohammed bin Rashid Al Maktoum, the Vice-President of Dubai, who is confident that additive manufacturing is definitely the way to go when it comes to civil engineering.

In a statement, Al Maktoum said: "We implement what we plan, and we pursue actions, not theories. The rapidly changing world requires us to accelerate our pace of development, for history does not recognise our plans bout our achievements." And what exactly have they been planning that is now being implemented? A fully 3D printed office. 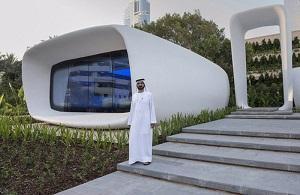 This is just the first in many presumptive projects, due to the fact that Dubai wants to be the world leader in additive manufacturing by 2030, as explained in their strategy. The strategy also details three key areas of focus in the 3D printing world: construction, medical products, and consumer products.

"We announce today the opening of the first 3D-printed office in the world, after less than a month of launching Dubai 3D printing strategy which showcases a modern model of construction. This is an experience we present to the world on implementing future technology in our lives, and it represents a new milestone for the UAE as a global leader in strategic achievements," Al Maktoum said.

The engineers who worked on the 3D printed office reportedly used a "special mixture of cement" and building material engineered in the UAE and the United States which allegedly cut labour costs by 50%. The building utilized mobile industrial printers which printed the building in 17 days after which minimal interior and exterior work was done in 2 days.

The office looks beautiful in and out and is being dubbed "the office of the future".

The Dubai government says the printing strategy they have outlined will inject $300 billion into the world economy by 2025.