Who is teaming up with the British government to test out the first energy storage systems that will assist the grid? Renewable Energy Systems (RES) will be working with the UK's National Grid and is expecting that it will be "fully operational" in 18 months. RES will balance the grid by supplying renewable energy in literal seconds, meaning this would be the first real picture of grid balancing, at least for the UK.

"This is the first time that battery storage will be used to provide such fast-acting frequency response service to the National Transmission Network in Great Britain. This innovating technology will enable us to respond to frequency issues in under a second, helping to maintain the integrity of the grid," said Adam Sims, Senior Account Manager at National Grid. 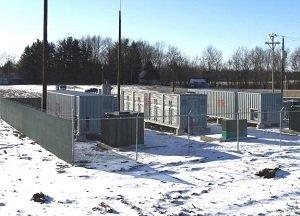 The company has already assisted with frequency services to Canada and the U.S. and now Britain is getting a helping hand in hopes that they might be able to move away from fossil fuel energy production. The U.K. National Infrastructure Commission (NIC) has published a report that claims that if Britain embraces clean energy they could save £8 billion.

We reported earlier in May that whisperings in the energy storage world indicated that Britain would 'quietly' become the leader in solar due to a £10 billion injection. So injecting 10 and saving 8. If the numbers are to be believed, there is a lot of efficiency coming to the British public in terms of energy storage.

RES will be supplying 20MW to the grid in less than a second. John Prendergast, energy storage manager at RES said: "Energy storage can play a large role in supporting the UK's transition to a secure, low carbon, low-cost energy system. We believe that this contract will play an important role in demonstrating this and will encourage policy makers and regulators to accelerate the removal of barriers to wider deployment of energy storage in the UK."