Formula E is an auto-racing competition that uses only electric-powered cars. The battery packs inside the vehicles are developed by Williams Advanced Engineering that is housed inside a body shell named the Spark-Renault SRT 01E. The car goes 0 to 60 MPH in 3 seconds and can reach a maximum speed of 140 MPH.

The batteries were updated by Williams Advanced Engineering in what they called the 'season two' battery, a year ago. The engineers have said that they intend to deliver 850kWh of power, making the batteries 25% more effective than the first season of battery packs they designed. 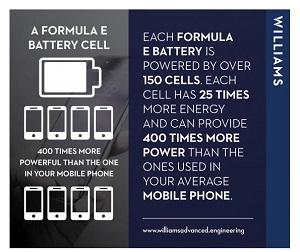 Now, the company is looking to repurpose the batteries once they have served their time in the Formula E vehicles. This is not a new idea, both Nissan and BMW will be re-using pre-existing lithium batteries once they reach their allotted legal lifespan. However, the lifespan of the lithium batteries used in cars is much longer than the legal lifespan of the vehicles, so they can be re-used once they are taken out of the vehicles. So, they can be re-used to provide energy storage to home units or other grid-balancing applications.

Therefore, Williams Advanced Engineering has announced that they will be re-using the batteries from their battery packs for home energy storage. Paul McNamara, the Techincal Director at Williams Advanced Engineering said: "For us, Formula E acts as a proving ground for higher batteries working in harsh environments. We have been able to fully test and validate our cooling systems, charge retention, and module design, and apply this technology to other projects outside of motorsport."

The battery parks hold a degree of fire-proof guarantee due to the work engineers had to do to ensure that the batteries did not explode during high-temperature races. The engineers have said that their batteries cool each and every cell 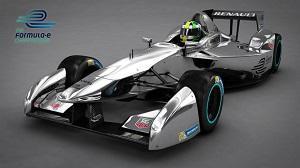 and control them to perform optimally. This bodes well for the company. Lithium-ion batteries, especially in the home storage unit market, could suffer from thermal runaway, which could cause the batteries to explode. However, McNamara says: "We can measure the battery's performance during each session [the race], and crucially the temperature of each individual cell to monitor how well thermal management is working." Hence, the engineers are confident that these batteries can be used for home energy storage, due to the thermal management and storing capabilities of their batteries.

"The championship really is a point of innovation for electric road cars. We've been able to test and validate various aspects, such as safety requirements, which are important considerations in the creation of electric vehicles. Things such as flammability, cooling, crash testing and potential leaks have all been evaluated in Formula E and now massively influence our design when developing systems for road cars," McNamara added.

All of this points to a more efficient and safer home energy storage unit. The Energy Storage Wars are quick becoming a game dominated by the automobile industry who ensure that their batteries are re-usable and efficient.