Wearable technology is the current trend that has led to a plethora of engineers that are investing their time into creating incredible innovations. Building batteries for devices that can be worn on a body is a challenge due to the need for a battery that powers wearables without being clunky and getting in the way. Smart watches are getting it right to some degree but what if we want truly skin-tight wearables? Researchers have looked into the flexibility of batteries and have come up with something that could revolutionize the field of wearable technology.

At the University of Illinois, in the Department of Materials Science and Engineering, researchers have been working on flexible power systems. They have published their findings in the Proceedings of the National Academy of Sciences under the title Soft, thin skin-mounted power management systems and their use in wireless thermography.

In the abstract of their report, the researchers say the current options for wearables are "incompatible with thin geometries" and aim to change that with their new flexible alternatives. They have created millimeter-scale solid-state batteries, along with solar cells into "electrically interconnected arrays". 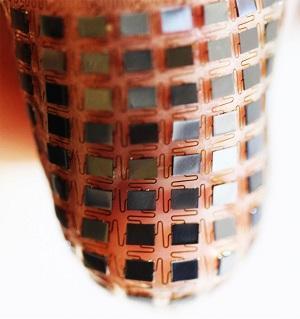 Explaining the electrically interconnected arrays, the engineers in their statement to the press, said: "The components are electronically connected via flexible copper-polymer interconnects, mounted on a highly elastic silicone core, and enclosed within a silicone shell. The resulting system could stretch up to 30% without detectable loss in solar power generation."

At the helm of the project is Professor John Rogers, at the Department of Materials Science and Engineering at the University of Illinois. He said: "If you think about conventional electrical devices they are all rigid as a consequence of the fact they are all formed on wafers of silicon. The question is how do you get from that to something that looks like the skin that matches the shape of the physical body."

The researchers then came up with the interconnected arrays that are connected through what they called 'spring-like wiring'. The result is something that can be worn and is stretchy enough to fit over a surface and then tightens up like a piece of clothing.

The research will be invaluable to the wearables industry as technology further integrates with humans and their bodies.