Engineered 'kidney on a chip' assists doctors with medicine dosage

Researchers at the University of Michigan are calling a device they have used to imitate the "flow of medication" around a system similar to the human kidney, the 'kidney on a chip'.The device allows the researchers to determine how kidney cells would be affected by certain medications which could lead to a more accurate dosage of drugs for patients in the future. Overdosing a patient could lead to deaths and this engineered kidney simulation device is on its way to avoiding overdosage. 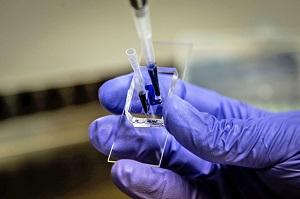 It has been reported that two-thirds of patients in the ICU have damaged kidneys when admitted. The problem is, up to twenty percent of these cases are due to medications that have damaged the kidney. This is because of the sort of medications that are given for kidney damage in ICU units of which some are considered toxic.

Shuichi Takayama, a professor of Biomedical Engineering at the University of Michigan said: "When you administer a drug, its concentration goes up quickly and it's gradually filtered out as it flows through the kidneys. A kidney on a chip enables us to simulate that filtering process, providing a much more accurate way to study how medications behave in the body."

The chip was made with what's called a permeable polyester membrane and a layer of actual kidney cells, sandwiched in between the microfluidic top and bottom parts. The device then simulates the environment of an actual kidney and delivers one large dose instead of one continuous dose of medicine. The idea is that one large dose kills fewer cells instead of one continuous dose that tends to kill more, according to the group's video.

The study was published in the IOP Science Journal under the title  Pharmacokinetic profile that reduces nephrotoxicity of gentamicin in a perfused kidney-on-a-chip. In the abstract, the researchers say that the paper aims "to illustrate the potential to fill in such pharmacokinetic gaps between animals and humans using a microfluidic kidney model." This means the research will also be able to apply to animals' kidneys as well. Thus, human and animal lives could be saved as a result of the correct amount of drugs being administered at a time.