Have you ever been out of power for long stretches of time, making you reach for your phone and shout down the municipality's ear?  It might have been a grid fault that took a while to find and repair. Sometimes the equipment at the utility has been damaged as a result. However, thanks to engineers at Binghamton University these faults will soon be found quicker due to SSA (Singular Spectrum Analysis).

"Theoretically, the SSA algorithm is an optimal approach for accurate and quick detection. However, it had not been adopted in real-world engineering applications. We adapted and improved the algorithm for the new application in power grid areas," said Yu Chen, an associate professor of electrical and computer engineering at Binghamton. 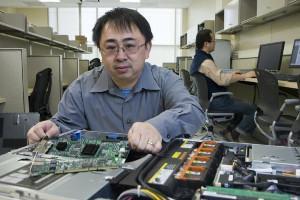 Yu Chen and another engineering co-author worked on a paper that makes a case for a grid system that goes down if even one circuit malfunctions. Grids that are currently operating can continually supply energy when circuits go down, which then forces engineers to look through multiple sources for where the fault could be. If one thing failed and made the entire system fall down, they could tell what failed quicker. The engineers have tested their system and say that they would be able to find faults much quicker than the current way of sifting through multiple circuits to find what could be wrong on multiple complete circuits that make up a grid.

"At the current stage, the algorithm can only detect and locate problems, and it cannot predict the future problems. It laid a solid foundation for the next step: prediction. Being able to detect subtle changes in the power grid promptly, our approach has the potential to predict future problems by including a power system model," said another one of the authors, Ning Zhou.