We've all seen them. A video that is sped up by about 2 times its normal rate, showing an industrial robot performing some sort of complicated task. The main issue is the speed at which the robot is actually operating at. Industrial robotics can't be fully implemented if what we're left with are slow robots working at a slow pace. That's where motion planning comes in. Researchers at Duke University explain: "Motion planning is the problem of finding a path to move a robot from its current position to some goal position without colliding with any obstacles."

Essentially, collision detection software needs to be built into the robot's processor so that it knows what to avoid and what to pick up. The processor has collision detecting circuits, according to an engineer which assisted in the building of the chip. 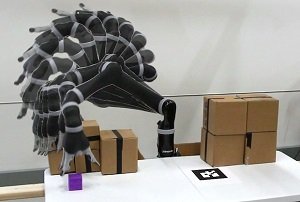 "Although motion planning has been studied for decades, existing techniques take seconds on general purpose CPUs and hundreds of milliseconds on power-hungry GPUs to create a single plan. This is a major obstacle to the practical use of robots in unstructured environments as there are often long delays between the desire to  execute a motion, and actually having a plan to execute," said the researchers in their video.

The researchers use multiple Microsoft Kinects put in four different locations around a robotic arm, which then calculates 3D volumes in its path, which are called voxels. The algorithm then calculates what is considered an object due to a pre-existing instruction and avoids anything that it is programmed to avoid.

As a result, the robot looks to be working as quick as a human would in terms of noticing what obstacles are in its way, and circumnavigating around them to obtain the item it is looking for. In other words, it is motion planning in real time much like a human brain would. Of course, it isn't completely full-proof yet but the research indicates that robots will be extra efficient in the future.

Watch the video below to see the impressive engineering feats that the engineers over at Duke Robotics have perfected: