What do nanotechnology, polyethylene (plastic), and clothing have in common? Well, they can all be combined to make clothing that helps the person wearing it stay cool, especially in hotter climates. Listen up, engineers who work in high-temperature workplaces! Engineers at Stanford University have created a plastic-based material that can be "woven" into items of clothing. The researchers published their findings in the Science journal, under the title: Radiative human body cooling by nanoporous polyethylene textile. 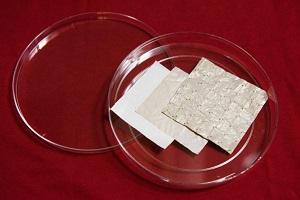 The plastic textile reportedly cools the body in two ways. According to the researchers, the textile is made from a nanostructure that allows the same kind of perspiration evaporation that normal clothes do. However, it also allows body heat, in the form of infrared radiation, to pass through and out of the clothing which is something that normal clothing doesn't do.

What do they plan to do with this newly made textile? Well, it could cut down energy costs because there will be less dependence on air-conditioning systems. Or at least, that's what the engineers would like. Yi Cui, an associate professor of materials science and engineering and the man at the helm of the project at Stanford said: "If you can cool the person rather than the building where they work or live, that will save energy."

Shanhui Fan, a professor of electrical engineering said: "Forty to 60 percent of our body heat is dissipated as infrared radiation when we are sitting in an office. But until now there has been little or no research on designing the thermal radiation characteristics of textiles."

Have we finally reached the breakthrough this Sasol ad hypothesized so many years back?

How did they do it?

In classic nano-engineering fashion, the researchers brought engineering disciplines from all corners together to develop their textile. Working with polyethylene they tested different variants. Eventually, they discovered a variant that was commonly used in batteries. The engineers then treated the variant with chemical processes, until the variant allowed water vapor molecules to be evaporated. The engineers indicated that the water evaporates through "nanopores" in the plastic, which makes the fabric breathable. What they found is that the plastic with, nanostructures built-in will ensure that body heat escapes the clothing. It will also "scatter" any heat that is trying to make it into the clothing.

The material allegedly makes the wearer 36 Fahrenheit (2.7 celcius) cooler in body temperature than conventional clothing. The engineers say this difference in heat could prevent someone from having to turn on a fan or an air-conditioner. Moreover, the engineers say they will keep on working on the material and improve it.

How much will it cost if it does make it to the market? Cui said: "If you want to make a textile, you have to be able to make huge volumes inexpensively." Therefore, the engineers are going to try and keep the cost as low as possible so that it could be affordable to the consumer public.

"In hindsight, some of what we've done looks very simple, but it's because a few have really been looking at engineering the radiation characteristics of textiles," Cui added.