The Japanese electronics company, Seiko Epson, have announced that they have technology in their possession that would enable robots to be incredibly precise. Tasks that their robots can perform range from putting a key into a keyhole to knowing how much force is necessary to open that door. The technology could grow to the point where robots thread a needle. The company revealed a piezo force sensor that utilizes technology that they have used in their inkjet printing technology before.

The sensor that they have built accurately calculates what is needed to do a task and then performs that task at the amount of precision it would require. 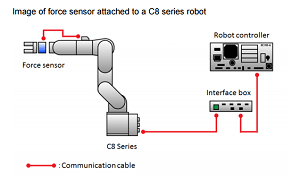 "It changes the way robots can be used. We think the market potential for the force sensor is enormous. To perform complex tasks like this with robots, it has needed really complex software, which has made it impossible for many people. This makes the software a lot simpler, which makes it easier to actually introduce the robots," said the President and Chief Executive of Epson, Minoru Usui.

Epson is confident that the robots could be used in the biomedical, agricultural and manufacturing industries. They use their sensor technology, which includes "placing a capacitor or resistor in an integrated circuit" that will enable the robot to notice what needs softer care. The sensor costs $7,200 and will work on any Epson robot. They have named the sensor the S250 series and is an efficient addition to assembly robots.

"The new force sensors are a significant development for Epson and for the manufacturing industry in general. As a company dedicated to manufacturing innovation, the new sensors help to expand the applications for robots, and bring us a step further towards achieving our goal of creating the world in which robots support people in a wide variety of situations," said Yoneharu Fukushima, the COO of Epson's Robotics Solutions Operations Division.

Industrial robots are taking over factories, especially in China. Last week Foxconn (in Vietnam) replaced 60,000 of their human workers with robots on their assembly line. Now, with Epson's technology, even more, assembly line factories could look into robotic replacements due to the precision chips that Epson are now selling.