Making the switch to renewable energy is slowly becoming easier and easier in a world that desperately desires progress in clean energy markets. Energy consumers want more control. Car manufacturers noticed this and companies like Tesla, BMW, Nissan and more, saw the gap in the market. Car manufacturers want to power homes and power vehicles in one all-inclusive, multi-faceted system. This future, cars manufacturers envision, all depend on lithium technologies. And more companies are jumping on the bandwagon.

Hanergy is the world's leader in thin-film solar power manufacturing and offers a range of solar photovoltaic packages that assist consumers in powering their households, allowing them to move further away from the utility grid. They also specialize in wind and hydropower generation. However, they are jumping into the vehicle game as well. The company has announced plans to release solar- 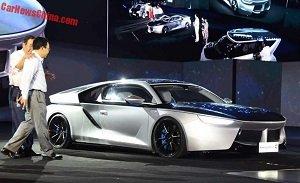 powered electric cars. The cars have thin-film solar panels on the bonnet and on the roof, capturing the energy from the sun, converting it, and storing in lithium-ion batteries. This means that electric vehicle charging stations are essentially not necessary, granted there is enough sun to power the vehicle. However, the vehicle can still be charged via EV charging stations. They're calling it the "zero charge" feature, that they hope to improve in upcoming years.

The vehicles can currently drive 49 miles on a six-hour solar charge. A full charge via an EV charging station would see the vehicle doing 217 miles on one charge. The company says their current cells convert solar energy at 31.6% and will further increase that to 38% by 2020. By 2025, the company hopes to have 42% conversion and also hope that a fully solar-powered car could be a reality by then.

"Breaking the bottleneck of poor practicality of previous solar-powered vehicles, the four launched by Hanergy are the first full thin-film solar power vehicles that can be commercialised, redefining new energy vehicles," Hanergy said in a statement.

The company is also developing more efficient solar panels that can be put on buses, to make buses more energy efficient and reduce emissions.