The port city of Fremantle is located approximately 25 minutes from Perth’s CBD and has played a large part in Western Australia’s history. In 1829, Captain Charles Fremantle claimed the West Coast of Australia under the British Crown. That same year, the first British settlers arrived on the shores of the Swan River and began to establish a colony, led by Governor James Stirling. 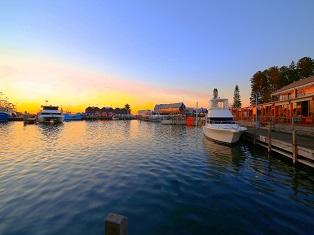 The Swan River Colony was unique, because it was built by free-settlers — civilians and military — rather than convicts. However, the colony struggled and manpower was needed to build the infrastructure required to ensure its success. As a result, convicts were sent to Western Australia from 1842 and constructed some of Fremantle’s most distinguished heritage buildings, including Fremantle Prison and Fremantle Arts Centre. During this time, the colony expanded 20 kilometres from Fremantle to Perth. Fremantle is also home to two of Western Australia’s most impressive engineering feats : the Stirling Bridge and the Fremantle Harbour.

Since the colony’s inception, a key focus was on building a bridge over the Swan River to connect Fremantle and the Perth township. Without one, the only way to cross between the two banks was by ferry. The first bridge was built out of timber by convicts in 1867 and named the North Fremantle Bridge, which was later changed to the High Level Bridge.

The first stage of the Eastern Railway was constructed in 1881, linking Guildford and Fremantle. As part of this project, a railway bridge was built in 1880. It was built with much stronger timber trusses than the High Level Bridge to carry the weight of the tracks. Fremantle experienced an economic boom in the late 1800s as a result of the gold rush and significant wheat production and the port became a gateway to the goldfields and agricultural lands. In 1895 a second railway bridge was built to carry stone from the quarry. These bridges were replaced by a new railway bridge in 1964, which is still in use today.

In 1974, Fremantle’s newest bridge was constructed 3 months ahead of schedule and received two awards and one award nomination for its design. The Stirling Bridge’s construction was considered significant because it was the first time a computerised wave formula was used to confirm a structure’s properties in a major civil engineering project in Australia. Another noteworthy point about the structure is all 292 of the segments were precast offsite to ensure each one was constructed within tight measurement constraints. As a result of this planning, not a single unit was rejected. The Stirling Bridge was also praised for its aesthetic design, which was achieved through analytic advancements in calculating shear transfer. At the time of its construction it was the longest bridge in Perth.

When the first British settlers arrived at the Swan River Colony they took shelter at Garden Island to protect their boats from gale winds. This emphasised the need for a breakwater to be built at Fremantle, however for the first 60 years the colony’s growth was hindered due to the lack of a harbour.

There were two jetties built at Fremantle in 1832 and 1854 respectively, yet the first substantial structure wasn’t built until 1872. It was named the Ocean Jetty. In 1891, C. Y. O’Connor was appointed Western Australia’s Engineer-in-Chief and he proposed a scheme for the development of a harbour at Fremantle . This was becoming progressively more important as the gold rush in Kalgoorlie significantly increased trade through this port. In 1892, the project began. It involved dredging a rocky bar to create a channel and dredging the river bed to create a deeper basin. Two moles were also constructed at the entrance of the harbour. The Ocean Jetty was extended to 1100 metres in 1896. The entire project was completed in 1897.

This project is considered significant by Engineers Australia because it’s “an example of superior assessment of oceanic factors.” For example, the breakwaters were the first case of large scale use of random tipped rocks in Australia. This project also introduced a major construction plant to Western Australia and required the management of a large-scale construction force and integration with the infrastructure of the small colony. It exceeded most other Australian ports of its time. Perhaps the most impressive part is that it hasn’t required any major maintenance or modifications in the past 100 years, despite ship growth and variety.