Further development in wearable integrated circuits and the Internet of Things

It's the year of engineering stretchable, wearable electronic devices for the impending future of wearing technology on our bodies, clothing etc. Nanoengineers, electrical engineers, mechanical engineers and computer engineers have never put this heads together quite like this before. Researchers at The University of Wisconsin-Madison are showing off their own flexible, wireless, wearable integrated circuits. Their studies were published on the Wiley Online Library in the Advanced Functional Materials journal. 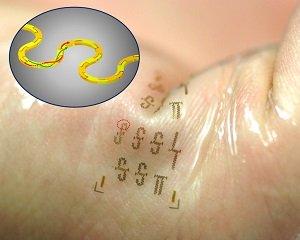 Professor in Engineering at UW-Madison, Zhenqian Ma was the lead author on the study highlighted the fact that their integrated circuits could assist engineers in the wearables market that could potentially utilize their technology to further wearable technology. The big reveal from the engineers is that their circuits will operate at 40GHz and utilize 5G networks so that they are also interconnected and synced with each other thanks to the Internet of Things.

Ma said: "We've found a way to integrate high-frequency active transistors into a useful circuit that can be wireless. This is a platform. This opens a door to lots of new capabilities."

The researchers think their new wearable circuits could be particularly useful in the biomedical field due to the circuits being very skin-like in the way that they are worn. Health monitoring is one of the big things engineers have built into wearables which we can see in devices such as the Fitbit et al. The researchers have ten years of research and development in transistor active devices and are confident they are on to a winner with their stretchable circuits.

The researchers have used minuscule power transmission cords to power the circuits that sidewind on the surface of whatever it has been placed on. The s-curved nature of the power transmission cords means that it can be stretched, somewhat. Some analysts are calling the invention the fastest wearable devices currently available and will be very instrumental in studies pertaining to integrated wearable circuits.