A lot of infrastructure lies underneath bodies of water. Take, for example, the SEACOM Subsea Cable system that provides Internet infrastructure to the African continent — any maintenance on it is done undersea. Presently, a fleet of ships remain ready to be sent out when a fault occurs, with repairs performed by divers.

Underwater bridge and structure inspections are also vital activities conducted by engineering specialists. Oil rigs and wind turbines are no different — they too need to be studied and maintained underneath water.

In future, underwater infrastructure monitoring, maintenance, and repair will — and probably should — be conducted by waterproof robots.

However, what robots face underneath the ocean surface is often treacherous. There are many factors that they have to deal with when undersea, such as; waves, currents and eddies. 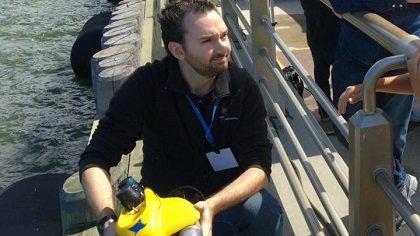 Professor of Mechanical Engineering at Stevens Institute of Technology, Brendan Englot, said robots naturally struggle to get their bearings underwater, which presents a unique challenge for artificial intelligence.

“There are so many difficult disturbances pushing the robot around, and there is often very poor visibility, making it hard to give a vehicle underwater the same situational awareness that a person would have just walking around on the ground or being up in the air,” he said.

Englot and his team have decided that instead of programming robots to achieve outcomes, they will let the machine do the learning instead. They purportedly do this through the use of an algorithm.

The team puts a robot in the water with the task of mapping a particular area. They collect the data and design an algorithm that provides the robot with new situational awareness when it is put underwater again.

Despite the changing underwater environment, the robot does indeed traverse the area more ably. This method is known as ‘reinforcement learning’ — a method that doesn’t rely on finalized mathematical models and Englot’s team concedes there is still room for improvement.

Utilizing sonar technology, the robot emits high frequency noises and calculates its position with reference to the sounds bouncing off surrounding objects. The team of engineers indicates that the robot could be sent for a second pass-by, utilizing a camera as well. They believe that combining the sonar measurements, corroborated by what a camera can see, could lead to some pretty efficient situational awareness for underwater robots.

Englot recently sent a robot to map out a pier in Manhattan.

“We didn’t have a prior model of that pier. We were able to send our robot down and it was able to come back and successfully locate itself throughout the whole mission,” he explained.

The algorithm is still in its early stages and the technology is still developing, but the future looks bright for self-learning robots that can be sent into dangerous underwater situations.