Cement. Can't live without it...can't live without it. Concrete is important in the civil engineering world, but, sustainable, environmentally non-harmful applications of concrete are becoming even more important. However, how do we make cement cooler? Researchers from the Michoacan University of San Nicolás de Hidalgo have the answer. Glow-in-the-dark cement. The researchers have used phosphorescent materials to make the glow-in-the-dark cement which would be more eco-friendly than using normal cement.

How does it work? It absorbs radiation during the day and then lights up at night. It's a phosphorescent cement that acts as an alternative to cement. The researchers explained: "By using additives, scientists are able to prevent the formation of crystals that occur normally during the production of cement, creating a material with a noncrystalline structure - similar to glass - that allows passage of light inside. Varying the proportion of additives added while manufacturing the cement regulates both its luminescent 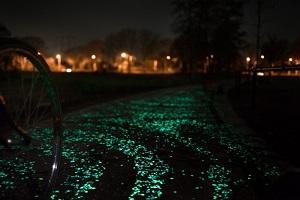 The 'cement' could be used in many towns for high visibility and eco-friendliness. The researchers say the cement could be lit-up for 12 hours. The big problem comes with the durability of the cement. Right now, further testing is required. The researchers are looking to the future. They want to hypothetically build entire walkways or bicycle lanes out phosphorescent cement . Additionally, if the cement is eco-friendly, companies may be interested. Minimizing the amount of GHG in the air bodes well for any company or entity, thereby shrinking carbon footprints in the cement industry.

The picture to the left of the article is not phosphorescent cement but stones. The future applications of the cement would be full walkways and bicycle lanes. The stones were positioned in such a way that it resembled Van Gogh's Starry Night, and is nothing more than a small project in the Netherlands.