Concrete batteries? It seems that civil engineering and mechanical engineering have met in the middle for a new type of energy storage.

A Swiss startup named Energy Vault has showcased an unorthodox experiment — they have stacked concrete blocks via an electric crane, and in doing this, stored energy.

The startup compares the phenomena to pumped hydroelectric energy storage. Quartz reports that 96 percent of the world's energy storage capacity comes from pumped hydro. This means whenever there is a surplus of electricity, the excess is used to pump the water up into a dam. Then when there is a demand for electricity to be generated, the water falls with the help of gravity. As it descends, the water turns the turbines to produce potential energy.

However, this method can be problematic. What about areas that don't have access to dam water and the subsequent turbines that enable pumped hydro? Well, Energy Vault says stacked concrete could be the answer. 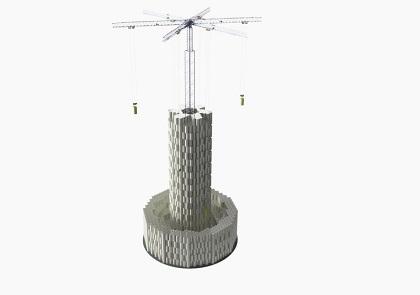 Simply put: when you elevate something against gravity, it stores energy. When it falls, you recover that energy. This is the theory behind Energy Vault's

new system. A crane, with an electric motor, picks up concrete blocks and stacks them in a tower, storing excess energy. Then, the blocks can be dropped from the stack while the motors are run backward and a generator shaft is used to produce the electricity. The startup envisions a 120 meter (400 foot) tall crane that lifts and stacks blocks all around it. The crane is powered by renewable energy like solar or wind — a computer then tells the crane where the concrete blocks are, and a camera assists, too. The block is then lifted, and a stack of concrete blocks begins.

The total energy in a full tower of concrete blocks as pictured above is 20 megawatt-hours (MWh). Quartz reports that it's enough to ‘power 2,000 Swiss homes for a whole day'. The startup is confident that a lower quality concrete can be produced for the plants specifically so they can continue generating energy all day long.

The experimentation is still in its early stages and being performed on a small scale. But, any energy storage applications that could be applied worldwide would be welcomed by governments who are trying to rely less and less on fossil fuel technologies to keep the lights on.

Some electrical engineers on social media have questioned how viable the concrete block stacking is. Some other engineers point to train regenerative braking as a better option. In California, a company named ARES (Advanced Rail Energy Storage System) has implemented a grid-scale energy management system that is capable of providing utility balance when it is needed.

The system utilizes 300-tonne autonomous train-like vehicles on a train track. When a power utility is in need of power, the vehicles - who would have made their way uphill when the utility had an excess of power - would begin their descent downhill. Their motors then become energy generators and generate electricity in the act of traveling downhill and then braking. The cabs have rocks in them so that they are weighted down and faster when coming downhill.

Here is an example of what it looks like: