Has an engineer designed an indestructible bridge?

Bridges need to be sturdy. It's just one of those things. If you don't build a sturdy bridge, what were you building one for, in the first place? A former researcher at the University of Warwick thinks that she may have perfected the method for building the perfect bridge. People are using the word 'indestructible'. The researchers attached to the product say a production method called 'form finding' could build a bridge that has no weak points. To get a clearer picture of what form finding structures are, we have to go back to 2008. Researchers at MIT wrote a report on Form-finding structures. They said that form-finding structures are "inherently characterized by the interaction of geometry and forces, the unique of long span dome, shell, and membrane structures." 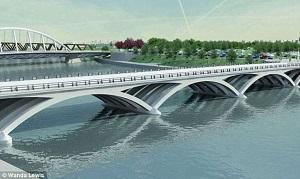 However, it is a little more complicated than that. The structures are more inspired by nature than anything else. They're not your conventional structures. According to retired professor from the University of Warwick's School of Engineering, Wanda Lewis, form-finding methods will build indestructible bridges.

In a statement posted on the University of Warwick's website, Professor Lewis was quoted, saying: "Nature's design principles cannot be matched by conventional engineering design. Aesthetics is an important aspect of any design, and we have been programmed to view some shapes, such as circular arches or spherical domes as aesthetic."

According to Lewis, using a mathematical model to determine arch-shapes, the bridge will be held in place by pure compression and tension with zero bending stresses. Lewis published her works in the Proceedings of the Royal Society A, under the title Mathematical Model of a moment-less arch.  world's first ultra-rigid indestructible bridge can be built.

The retired engineer allegedly did an experiment with a piece of fabric that lay in its natural shape, which was then frozen and inverted into a rigid object. Lewis then found the coordinates of the shape through computation and measured the gravitational forces of the object. What she found was that this upside frozen-in-place fabric arch caused a moment-less arch that was able to handle downward forces (see picture above).