Home NewsHigher density lithium-ion batteries? It's all in the oxygen

Higher density lithium-ion batteries? It's all in the oxygen

Lithium-ion batteries are the lifeblood of the energy storage movement, without them the current climate of moving towards renewable energy would be one limb short. However, improving lithium-ion batteries is also something that engineers concern themselves with so that we can utilize batteries to their full potential. Researchers at Lawrence Berkeley National Laboratory have been working on improving lithium-ion performance.

Chemical engineers used the energy transfer in lithium batteries and altered the oxygen reaction that occurs. The lead engineer on the project, Gerbrand Ceder, said that they could potentially make batteries"with higher energy density" with the research they have conducted. 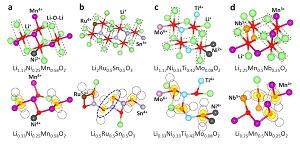 "Energy storage is important for many of the things we do, whether it's carrying our phone and not having to charge it to bigger societal issues," Ceder said. The researchers worked with the lithium-rich cathode, which oxygen plays a big factor in. The researchers explained, saying: "The structural and chemical origin of the oxygen redox activity in layered and cation-disordered Li-excess cathode materials."

A normal lithium-ion battery is charged and discharged with a transition metal that the cathode oxidizes and then releases cathodes into.

"What we and others have been claiming recently is that you can take an electron off of the oxygen and put it back, which is fairly radical. That's the big idea for this cathode design. This paper specifically shows that it's true and more importantly, shows under which conditions that it becomes true," Ceder said.

"This is a very exciting direction being pursued by battery scientists. It has been experimentally demonstrated many times that a lithium-excess cathode material can deliver higher energy density, about 50 percent higher than the current cathode materials in commercial lithium batteries," said Jinhyuk Lee, a co-author of the study.

Here is the study: The structural and chemical origin of the oxygen redox activity in layered and cation-disordered Li-excess cathode materials