How Engineers Pumped Water to the Goldfields

The Swan River Colony was settled in 1829, and in its first 60 years Western Australia made little progress. In 1881 the state had a population of less than 30,000 people, however by 1911 the 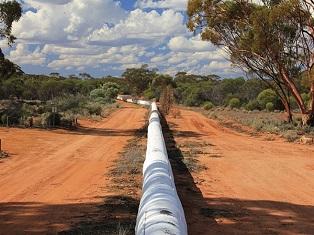 population had grown to 282,000. This was a result of the gold mining in the eastern “desert” from 1893, which drew people from across Australia and the rest of the world. The scarcity of water in the Goldfields area caused many deaths and the rapid spread of disease, so the government decided they needed to implement a scheme to address this problem.

Western Australia’s Engineer-in-Chief C. Y. O’Connor proposed the construction of a 30 metre high dam, 521 kilometres of steel pipeline and 8 steam-driven pump stations with associated reservoirs. He was met with criticism due to the cost of the project and the fact that many people believed this plan wouldn’t work. However, construction of the Mundaring Weir and Coolgardie Pipeline still went ahead.

One of the reasons this project was considered significant by Engineers Australia was because the construction occurred during a time when Western Australia lacked its own resources. This meant the cement, steel and machinery had to be imported from Europe and timber had to come from the United States. As a result, it took between six weeks and three months for the materials to arrive. Despite this, it took just under five years for the project to be completed. This was due to the successful leadership of those directing the construction and the large workforce who contributed.

There were also no tertiary or technical education facilities in the state at the time; however those working on the construction of the pipeline utilised innovative technologies. For example, this construction developed the practice of using thin-walled steel pipes to deliver water to remote areas with arid conditions, typical of Australia.

On completion, the dam was the largest in the southern hemisphere and the pipeline’s length was unprecedented. The project ensured the viability of the settlement in the Goldfields area by providing a reliable water supply. This greatly boosted the development of Western Australia.

Today, the Mundaring Weir is still in use and located in the Darling Ranges escarpment. It’s a popular picnic spot and close to natural hiking trails in the surrounding Perth Hills.