Countries like India and Africa have poverty-stricken areas with people who need food just like the rest of the world. In these impoverished areas, the burning of unstable gas stoves is commonplace, which has its own dangers due to shack fires that could occur. Burning charcoal is out of the question indoors, due to carbon monoxide. Burning a wood fire also causes unhealthy amounts of smoke if it were to be burned indoors. However, a group of engineers at a company named BioLite have banded together to bring a smoke-less clean burning wood stove, that is now available to these impoverished nations.

So how does it work? 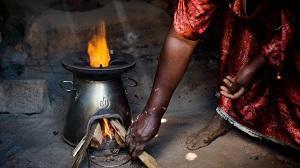 The answer is in the fans, which ensures more oxygen powers the fire instead of just burning the wood and creating wasteful smoke. Smoke is the indication of fuel for the fire that is being wasted and emitted, a fuel that could assist a fire in burning.

"The fan is really the heart of our home stove and camp stove products. It's important because it's doing two jobs at once. The fan is providing oxygen to the fire to make it burn clean and efficiently but it's also cooling the thermal-electric generator which allows us to make power," Gist said.

The team has 3D printed fan molds so that they can test an assortment of different fan sizes to measure how the fire can be manipulated inside the home stove. After the fans are tested they implement them into the full system.

The researchers use what they refer to as 'burn hoods' which test the amount of emissions being released by the stove. The emissions analyzers then produce data

The researchers claim that 90 percent of the smoke that conventional stoves produce - in poorer areas in India and Africa - is completely eliminated. The team says their target audience are the 1.2 billion people who do not have access to electricity.

"It's a really tough balancing act, the fans doing double duty, providing the air to the fire but also cooling the thermal-electric generator and you can imagine we can put more power into the fan to generate more electricity but we've taken more electricity to do that. At the same time, we have to balance  the amount of air and oxygen the fire needs. It's that balancing act that we work so hard on doing in the lab," Gist said.