Good news out of MIT this week. They are actively trying to get rid of our wrinkled skin.

Daniel Anderson, associate professor at MIT said: "The goal was to really create something that was totally invisible, breathable, could coat the skin, protect it, perhaps deliver drugs to it and also perhaps even make it look better." 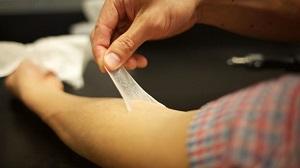 Robert Langer, a chemical engineer, and professor at MIT, involved with the project, said: "What we've been able to do is create a cream, basically, that you could put on the skin and then once it's on the skin it can actually form, essentially, a second skin. And it's transparent, it's essentially invisible, it's not messy at all and has good mechanical strength."

Langer says the technology works in two stages: There is an invisible cream that a test subject can apply to their skin involving a polymer that binds the cream to the skin. The second step is applying a catalyst that causes a reaction on the skin. "You could use it in various different areas. One set of things might be in cosmetics where you use it to tighten skin on different parts of the body, another could be for therapeutics where you use it as a whole new plastic ointment that could be used to deliver drugs to the skin to treat different skin diseases," Langer said.

The second skin research has been a ten-year project that was conducted by scientists at MIT, Massachusetts General Hospital, Living Proof and Olivo Labs.

You can purchase and read the research conducted that has been published in the Nature journal.