Home NewsMorphing and adapting car interiors: the 4D printing of the future

Morphing and adapting car interiors: the 4D printing of the future

Imagine for a second the kinds of innovation that could occur if MIT (Massachusetts Institute of Technology) and BMW joined forces. Well, stop imagining. The two have joined forces. But, not necessarily in the way you might have thought. The university and the car manufacturer have linked arms, and are ready to harvest their latest obsession: air.

The engineers from MIT’s Self Assembly Lab and BMW have created a new 3D printed structure utilizing a process known as ‘Liquid Printed Pneumatics’. 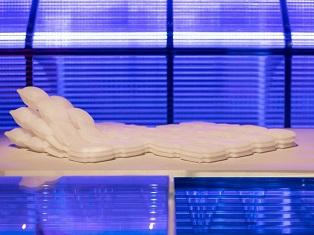 The interdisciplinary collaboration between engineers and labs has created the first material that can morph from one shape into another shape - thanks to air...and rapid liquid printing. The printer emits the necessary liquid material into a mould which then hardens.

The printer is able to print 100 percent silicone rubber into sophisticated structures, structures like air chambers. These ‘air pockets’ can inflate or deflate based on how they are ‘programmed’. Traditional 3D printers have struggled to perfect sizeable prints and have stuck to small-time hard plastic prints. But now, with the new fabrication process, bigger prints are guaranteed.

Skylar Tibbits, the co-director and founder of the Self-Assembly Lab refers to the work they do as ‘4D printing’; 3D printed objects that can adapt, morph and assemble based on necessity. Talking about their new air-bubble 3D printed innovation, Tibbits spoke to FastCompany, saying:

“It’s programming it with air. Instead of zeros and ones, you’re sending different pulses of air.”

The result is a material that appears to be alive and moving. Now, BMW just needs to find a use for the technology on the inside or outside of their cars. But something tells us they won’t have a problem coming up with a concept.

This isn’t the first time BMW has flirted with the idea of a vehicle that could adapt to the needs of the driver, and even the needs of the environment it is driving in. In 2008, the company introduced a concept car that had a body of fabric.

The car’s name was GINA (Geometry and functions in ‘N’ Adaptations). Flexibility and stretchability was a big focus for the engineering team - which had begun work on the car as far back as 2001. The idea, however, is a novel one. If a car’s exterior was stretchable, flexible and non-rigid, it could - if the technology was more fleshed out - heal itself after an accident.

Aerodynamics was also a focus. The car would change shape at different speeds to make the car as aerodynamic as possible, literally morphing and adapting on-the-fly.

What is apparent is that BMW has been attempting to innovate within the exterior and interior designs of cars for ten years now. The engineers at BMW and MIT believe that the inflatable materials they have recently designed could be used in the interior of the vehicles in the future - an adaptable material that could be tailor made for the customer.

Tibbits explains that the customer could ‘programme’ the kind of interior design they would want on any given day inside their car. He said:

“The interior could be different every time you got in, for every person who got in. By using pressure differential inside and out, you can make it morph around a human or object.”

Thereby, when cars are autonomous and the driver felt like having a nap, they could program the many airbags in the interior to morph into a more relaxing environment for the passenger inside.