Home NewsNew opportunities with an upturn in Western Australia

New opportunities with an upturn in Western Australia

More jobs, more opportunities, and more money. Western Australia (WA) is a state sighing with relief after it was announced that the economic downturn is turning around.

Engineering industry professionals may find solace in the fact that WA economy is gradually gathering momentum. It is finding its rightful place as a state bursting with resources which are needed here and abroad; a feat requiring talented engineers and technicians.

Western Australia saw a mining boom that secured jobs for the state in the last decade. It was inevitably followed by a steep unemployment dip after the completion of the mines. By 2015, hundreds of miners were without jobs, a situation exacerbated by the price of iron ore plummeting. It would become known as the ‘iron ore downturn’.

Fast forward to 2018 and thankfully the economy is turning around. Western Australia’s Deputy Premier, Roger Cook, announced last week that the unemployment rate was improving.

New figures published by the Australian Bureau of Statistics showed that the unemployment rate in Western Australia had reduced from 6.6% to 5.7% in December 2017.

Cook told reporters: “What it’s shown is that since December 2016 we’ve seen growth of almost 40,000 jobs in Western Australia. This is tangible evidence that the West Australian economy is turning in the right direction”.

The most sought after jobs are reportedly in the mining, resources, energy, and construction industries. This is according to ABC’s WA job advertisement statistical research. In fact, miners are again being imported into the state to keep up with the demand.

Cook also confirms that the Public Transport Authority, Metronet, is launching projects that will see jobs created, many of which will be for skilled workers. 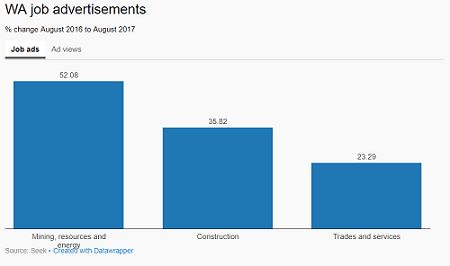 Getting the education and training

The Engineering Institute of Technology (EIT) specializes in educating and training engineering industry personnel. They use two learning platforms: the first is their live, interactive approach - this allows students to study (alongside full time work) from anywhere in the world.

Their second platform is the more traditional on-campus approach to learning. For international students looking for a challenge and an adventure this may be particularly appealing. EIT’s campus is in Perth, Western Australia and applications for their July 2018 intakes are now being accepted. EIT has a range of  listed scholarships available for local and international students.