Engineers in North Dakota, in the United States, are embroiled in a stop-start construction build of what would be the Dakota Access Pipeline. Due to citizen pressures in the form of protesting, the project has been halted by the U.S. Court of Appeals for the District of Columbia Circuit. Meaning, that a federal court under the Obama administration has stopped the pipeline progressing, for now. Obama previously completely canceled a pipeline that was meant to run from Canada to Texas, named the Keystone XL Pipeline.

The engineers in North Dakota are from a company named Dakota Access, who are made up of Energy Transfer Partners. They have been assembling the pipeline that is to span four states wide. It will reportedly cost $3.8 billion and will transport 470,000 barrels of "light sweet crude oil" from North Dakota, all the way to Patoka, Illinois, twenty-four hours a day.

The engineers say the project will create 8,000 to 12,000 new local jobs during construction. They also say that the pipeline will lead to millions "in state and local revenues" for the states it spans across. There's just one problem, however. The proposed pipeline reportedly cuts through land sacred to the Lakȟóta  people ; indigenous peoples of the Great Plains of North America. The Rock Sioux Tribe also expressed concerns that it could impact the drinking water in the nearby areas where they are stationed.

The engineers have also tried to assure the public that a pipeline is the safest way to transport crude oil. However, the tribes and the local protestors are concerned about hypothetical leaks or accidents that might befall the pipeline, leading to oil spills. In the past, oil would be transported by rail, which led to fiery derailments.

The BBC confirms that the protests linked to the North Dakota pipeline have brought together the largest Native American gathering in 100 years. Dave Archambault II from the Standing Rock Sioux Tribe, who are protesting against the pipeline said: "It is a pipeline that is threatening the lives of people, lives of my tribe as well as millions down the river. It threatens the ancestral sites that are 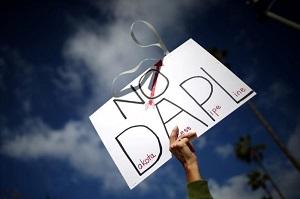 significant to our tribe."

The Energy Transfer Partners are not backing down. They say they are committed to completing the pipeline's construction and are imploring the Obama administration to lift their moratorium so that they can continue building the Dakota Access Pipeline.

One thing the engineers are right about is how important pipelines have been to American energy production. On their website, Dakota Access write: "Pipelines play a vital role in our daily lives and provide critical links between the sources of energy in production fields and end-users or consumers. Without pipelines, the majority of the United States would not have access to American oil and natural gas..."

However, the continued fight to cut fossil-fuel emissions, around the world, has meant that pipeline systems in oil and natural gas have seen some criticism. Whether or not the Dakota Access Pipeline's construction will continue remains to be seen.