It was just the other day that Switzerland opened the longest railway tunnel in the world. Now, Norway is planning the world's first underwater tube-shaped tunnel. A masterpiece of structural engineering that will consist of two 1,200 meters (4,000 ft) concrete tubes that will lie 30 meters below the surface of the Norwegian sea. The tunnel will connect the city of Kristiansand to the city of Trondheim. Norway already has the record for the largest road tunnel in the world ;The Lærdal Tunnel is 15.23 miles long (24.51-kilometers). It looks like they're on their way to another world-first record. 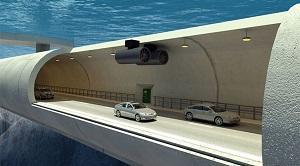 According to Wired, if you were to drive from Kristiansand to Trondheim it would take you 21 hours on the roads that already exist. Not to mention, the number of ferries you would have to take due to Norway's notorious fjords and difficult to navigate mountainous areas. There are 7 ferry rides that need to happen to complete the journey from Kristiansand to Trondheim. The tunnels are set to make the journey a tad more streamlined. The engineers behind the project say that the new underwater tunnels could eliminate 10 hours of travel time once built. Norway will be funding the project, with a handsome $25 billion. Construction is expected to be completed by 2035.

The tunnel will be held up by pontoons, that would be secured with trusses to keep them in one place. The engineers confirmed that going underwater by 60 to 100 feet would ensure that should storms happen, the floating tunnel would be safe.

Arianna Minoretti, a senior civil structural engineer from the Norwegian Public Roads Administration (NPRA) says that they might also bolt the tunnels to the bedrock to ensure further stability. "Having this connection means that people there do not have to wait for a helicopter to go to the hospital." She also says that driving through the tunnel, to a driver, would feel like any other tunnel.

The NPRA also maintain that the original scenery will not be disrupted so those who still wish to make the journey the long way around will still be able to do so. However, those who want to shave some time off of their travel times will find the tunnels very useful. The idea of the underwater tunnels might also inspire other countries to follow suit with similar tunnel designs once the success of the Norwegian tunnels is shown.