An earthquake rocked the city of Anchorage in the state of Alaska on Friday the 30th of November 2018. On the Richter scale, it measured in at 7.0. Since then 1,000 aftershocks have been observed. Not since 1964 had there been such an intense earthquake in the area.

Thankfully, there were no deaths or serious injuries reported in the aftermath of the quake. However, infrastructure was hit incredibly hard. Roadways in Anchorage were damaged, and water lines were ruptured. Natural gas workers have also been flown in to restore gas to households, and fix any faults that might have occurred when the earthquake hit.

The civil engineers jumped into action, repairing the roads in record time!  The repair crews have become the golden standard for civil engineering reaction to post-earthquake road repair.

One of the more damaged roads was the freeway off-ramp at the International Airport Road and Minnesota Boulevard. The road was featured in much of the mainstream media coverage of the earthquake and shows what the repair crews faced. 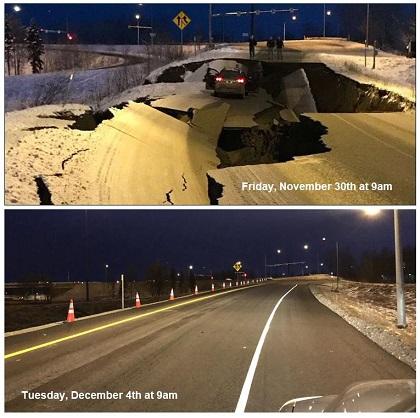 Despite this it took only four days for the Alaska Department of Transportation and Public Facilities to complete the repairs!

“Here is just another great example how Alaskans are responding after last Friday’s earthquake! The off-ramp at International Airport Road and Minnesota Boulevard in Anchorage was reopened early this morning, complete with new asphalt.”

So astounding was the turn-around that social media commenters dismissed the photo as fake. One commenter joked that it would take six years to fix a pothole in Texas. An Alaskan commenter eventually uploaded his own photo of the newly repaired road, proving that the road had indeed been repaired. Other commenters celebrated the repair crews who braved the cold and patched the road up.

The Department of Transportation reported that compacting asphalt in the colder temperatures was difficult, but the repairs had to be done.

The Anchorage Assembly declared a state of civil emergency in the city as earthquake damage repairs progressed. The structural integrity of the bridges, after the quake, was also a major concern. Extra inspectors were brought in from the Department of Transportation to do the necessary studies and calculate the damage. Aftershocks were the most concerning, because further cracks to bridges and roads could be expected.

Overall, the remarkably efficient repairs to the roads and other infrastructure in Anchorage are astounding - the only other example of roads being repaired so quickly after earthquake damage is in Japan.