There are more than enough photographs of abandoned buildings on the internet to fill tome, but the history behind them is often overlooked. Oftentimes abandoned buildings speak of a troublesome past - a past where engineers, among others, were involved in constructing the next great thing which did not stand the test of time for various reasons. Engineers from a subsequent generation are then employed to take the abandoned husk of past infrastructure, and turn it into something new. 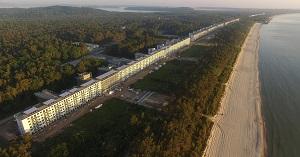 Abandoned buildings are, however, most often demolished; it is rare for them to be re-purposed for the arrival of new tenants. Despite this, the coastline of Rügen in Germany is experiencing just such a renewal. A seaside resort in Rügen, once belonging to the Nazi Party, is now being re-upholstered and turned into the sort of holiday destination Adolf Hitler could only have dreamed of.

The original construction began in 1936. The entire resort stretched along the edge of the coast for an impressive 4.5 kilometers. Engineers were tasked to construct 8 identical buildings, each 450 meters in length, and build them to accommodate 20,000 inhabitants. The plans to make it into a fully functioning resort were halted when war began in 1939.

The buildings were built out of reinforced concrete, a very new and ‘cutting edge’ method of structural engineering at the time. (Proof that German engineering was churning along and innovating even in the 1930s.) 9,000 laborers were used to construct the eight blocks. A cinema and a theater were built as well.

“The photos cannot physically do it justice. By all accounts, it would have been one of the most impressive structures in the world.”

It was purportedly built for the industrial workers of Nazi Germany, a resort for much needed holidays. Historians, however, believe it was also used for the indoctrination of German people and this more sinister reputation remains.

The 8 buildings in Rügen underwent further changes after World War 2. The Soviets destroyed one of the buildings, but before that they occupied one of them as a military barracks from 1945 to 1955. Some buildings were then rebuilt, renovated and restored in 1990.

In 1993, the entire area, with exception to Block 3, was deserted after being used by military schools and political asylum seekers. Block 3, between 1995 and 2005, was used as an exhibition and museum area to educate people about the past. After 2004, after not being able to find permanent residents for the blocks, the resort was opened up to private investors.

From 2006 onward, ownership of the blocks changed hands several times, but by 2013 the Praro Resort had emerged. The four buildings that remained standing were renovated into a hotel and re-purposed into elderly housing. Tennis courts and a swimming pool were added, and a shopping center was built. The project cost north of $131 million. A fifth block was turned into a youth hostel which is now considered to be one of Germany’s largest youth hostels.

A bright future for abandoned buildings?

Could abandoned buildings rise again in the smart city future? With global population growth and the expansion of cities, the demand for infrastructure and housing increases. Civil and structural engineers could find themselves attached to renovation projects like the Prora Resort in the near future; creating something new out of something old and forgotten, giving it new meaning, and being cognizant of the past.