The U.S. Food and Drug Administration (FDA) has given the greenlight to a robotics company named Auris Robotics. The company registered the ARES (Auris Robotic Endoscopy System) robot with the FDA, and they have finally been given the go-ahead to use the robot to work in the medical field.

Auris Robotics has their roots in another company named Intuitive Surgical who showed off their Da-Vinci robot surgical system The Da Vinci is a robot that has "tiny-wristed" instruments that can reach into the human body with the assistance of a doctor to get into hard-to-reach areas of the body.

Please note this video has actual surgical footage in it, viewer discretion is advised: 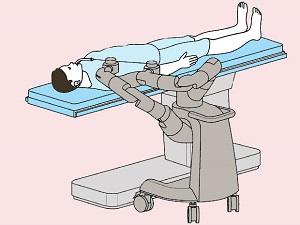 Now, Auris Robotics is wanting to build "the next generation of surgical robots". Interestingly, it seems the group is actively building endoluminal surgical robots. This means that they are building a non-invasive 'surgical' robot. The robot would not make incisions so that it can access internal organs. In the FDA's premarket notification, they specify that the medical uses the new robot will have, focus on ear, nose and throat. These robots are going to have to be incredibly precise if that is the case.

IEEE Spectrum has reported that the first human trial at the hands of the robot has already been successfully conducted. Fitted to the robot, are "lasers, forceps, needles, graspers, and scalpels", which the company says will probably be used once the robot gets clearance to do full-fledged surgeries. For now, these robots are controlled remotely by a doctor, however, when robots become automated surgeons, would you trust them to perform surgery on you? Let us know in our comments section.