Industrial workers have to operate some heavy machinery and carry some heavy equipment. Now, a new glove that makes it easier to do those things is here.  Engineers from General Motors have shown off a new innovation they have been working on for quite some time. A robotic glove turned industrial glove. The glove is a collaborative project between General Motors and NASA. The glove is called the RoboGlove. It was a joint venture between GM and NASA that took nine years to perfect. The gloves were initially designed for the use of the Robonaut 2 that works aboard the International Space Station. The gloves were designed four years ago but are now being re-purposed for industrial operations. 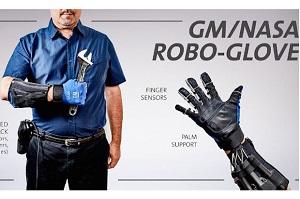 Marty Linn, GM's Principal Engineer of Robotics, said: "This was really inspired by the work that was done on the hands of R-2. The unique thing about R-2 is its hands and its ability to manipulate objects and to do work. We've taken the same sort of technology, the tendon driven actuators and the sensors and translated that from the robot into a glove that a human operator could wear."

The gloves will be used by workers with the purpose of reducing the amount of fatigue that occurs in heavy lifting and working with tools. The technology was trademarked under the name 'SEM' which translates to Soft Extra Muscle technology. Another company that wants to utilize the technology is Bioservo Technologies. They intend to use the glove for biomedical and industrial purposes.

In a statement, Tomas War, CEO of Bioservo Technologies, said: "Combining the best of three worlds – space technology from NASA, engineering from GM and 'medtech from Bioservo – in a new industrial glove could lead to industrial scale use of the technology."

"This glove provides additional grip force on the order of ten pounds to be able to help the operator do their job longer and better," Linn added. The engineers say the gloves have a grasp force that makes industrial heavy-lifting much easier. It significantly reduces the force a worker needs to exert in industrial operations.

To see how the RoboGlove could be used in the industrial world, take a look at the video below: