The Tottenham Hotspur Football Club has recently announced their new stadium has been “future-proofed” to accommodate safe standing, should the legislation in the UK change.

Standing during games has been banned at in the top two divisions of English football since 1989, when 96 Liverpool fans were killed in the Hillsborough disaster. However, a 2016 inquest into the tragedy found the crush was not caused by standing.

As a result, the Football Supporters’ Federation launched a petition to overturn the ban and give football clubs a choice to implement safe-standing areas for fans. The now-closed petition garnered over 112,000 signatures and sparked a debate in Parliament on June 25.

The English Football League and the Premier League both hold the position that clubs should have a choice as to whether their fans can sit or stand during a match. The Labour Party has also called for the law to be changed.

The Hillsborough Justice Campaign (HJC) was established in order to seek justice for those who were injured or killed in the crush, and their families. In a blog post for metro.co.uk, HJC campaigner Sheila Coleman expressed her concern that some people are against safe-standing because of the Hillsborough disaster. She said this is disingenuous as it implies that standing was a factor that led to the tragedy.

“It remains the collective view of the HJC that standing never killed anyone at a football match,” she said.

“Within the group there remains differing opinions relating to standing but we are all agreed that a healthy debate on the issue is necessary. That debate must have as its focal point the issue of safety. That is paramount as is supporters having a choice.” 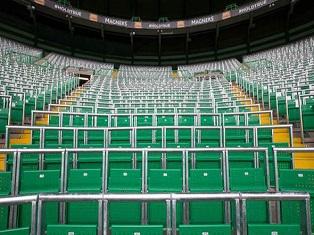 Tottenham Hotspur executive director Donna-Maria Cullen echoed these sentiments in a press release from the club.

“As a Club, we did not engage on this until the Hillsborough Inquiry was concluded, which showed that the tragedy in April 1989 had not been caused by standing,” she said.

“We then conducted research with our fan base which showed overwhelming support for safe standing. The main reasons given were choice and atmosphere - fans cannot sing sitting down.”

Designing the new stadium to accommodate safe standing has sparked the question as to whether it’s possible to convert seated areas to standing areas in old stadiums. These safe standing areas are characterised by rail seating — fixed rail barriers with attached fold-up seats to designate each standing slot.

“In terms of converting an existing stadium the first thing to consider is loading. At the moment current stadia are designed for double what they currently hold,” he said.

“Modern stadia are designed at 4kN/m² but currently only holds 2kN/m², so increasing capacity would be no problem, if that is what a club wanted to do.”

Dynamics would also need to be tested, according to Chipchase, to avoid the stands from vibrating underneath the crowd.

“In Frankfurt, the Eintracht fans know that if they all jump at the same time they can get the stands to move up and down with them. It is pretty scary to watch and they could be resonating the tier to collapse,” he said.

“I can’t think of a single stadium in the UK that would have an issue with dynamics, but they would still have to be tested before being converted.”

While dynamics and capacity may not be a problem, sightlines and old terraces could cause issues.

Mott MacDonald technical director Nick Ling told New Civil Engineer that visibility of the field could be reduced, as people wouldn’t necessarily be able to see over the person in front of them.

“Standing sections increase the risk of reduced C values or even negative values,” he said.

“So sightline and C value issues could mean that tiers need reprofiling which could result in a change to the structure and retracing.

“It is feasible for some stadia, but more difficult for others. If sightlines are tight, it could be difficult to make the alterations required.”

Another issue he flagged was that fixing barriers to old terraces could be structurally challenging and require more capital investment.

These rail seats have been trialled at Scotland’s Celtic Park and across Europe, where they are particularly popular in Germany. Reasons for this are that they increase the stadiums’ capacity and allow fans to safely stand throughout the game if they choose to.