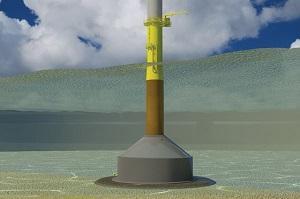 BAM's head of civil engineering Malcolm Corlett said: "This is a very significant milestone not just for BAM but for the wider offshore wind sector. An opportunity to demonstrate the potential for self-installing concrete gravity bases to provide economic foundations for large wind turbines in deeper water. Following five years of intensive work refining our design and method of construction we now have a live project to demonstrate our technology and bring new skills and opportunity to the northeast of England."

According to their video, EDF  would make it easy to fill the foundations with sand on land, or pump sand into them once secured underwater. It is called 'float and sink' technology. This is where the foundations are floated and then sunk into position.

The chief executive of RenewableUK Hugh McNeal said: "The Blyth project highlights how Britain is leading the way in offshore wind innovation. Our industry is at the forefront of developing renewable technology that will be exported around the world."

To see how these bases will be engineered in a construction yard alongside the ocean, look at this video: